Greek Wine Goes Back to Basics to Resist Climate Change 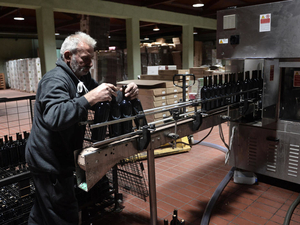 Thirty-eight years after he revived his family's small vineyard in northern Greece, Vangelis Gerovassiliou proudly gazes on his property that grows one of the country's most popular wines.

And after 45 years in the business, Gerovassiliou says that with a little local savvy, there are answers even to global warming.

"It's an opportunity for Greek winemakers to return to the original grape varieties, and to carefully choose the location of the vines on suitable land," he told AFP, adding that until recently, vineyards were planted "everywhere".

Growers in northern Greece, one of the country's top wine-producing areas, have been among the first nationally to be interested in the consequences of rising temperatures.

Consequently, it has been a good year -- possibly the best this decade, according to a recent statement from their local association.

With the rise in temperatures, grape maturity "has accelerated by two to three weeks," says Gerovassiliou, whose vineyard is located 25 kilometers (16 miles) south of Thessaloniki, on the northern shores of the Aegean Sea.

"We used to harvest at the beginning of September, now the harvest takes place around August 10 or 15", he adds, shortly before leading prospective buyers from Germany on a site tour.

For over four decades, this oenologist and wine producer has worked with Malagousia, a long-forgotten Greek grape variety that he strives to bring up to date.

Greek local grape varieties "do not undergo global warming -- they adapt," he notes.

The grapes ripen more slowly than "foreign" grape varieties like Merlot, whose early maturity causes an undesirable increase in alcohol content, he says.

"Climate change constitutes a defeat for imported varieties," he concludes.

It is also the path favored by Angelos Iatridis.

When this oenologist decided to invest in a vineyard in the mid-1990s, he first set his sights on Amyntaio near the town of Florina, a few kilometers from the border with North Macedonia.

At an altitude of between 620 and 710 metres, his vineyards are surrounded by three mountains and two rivers.

It is a "closed ecosystem" of about 20 hectares (49 acres) with four weather stations, affording daily climate monitoring.

The winegrower has already noticed "a decrease in showers in recent years, but an increase in their intensity".

"The amount of sunshine has also increased, but this is something positive for us," notes Iatridis, who has made Xinomavro the main grape variety on his farm.

Harvesting earlier and better adapting the choice of grape varieties are similar to effective solutions in the face of global warming.

But this awareness and the implementation of concrete measures remain isolated across Greece, and few winegrowers adapt their work to climate change.

Iatridis says he first organised a conference on climate change in 2004.

"They thought we were talking gobbledegook," he recalls.

"We don't have an action plan yet," admits Yannis Voyatzis, president of the Greek National Organisation of Professional Wine Growers.

"We are starting to work on one, but the variety of regions and grape varieties represents a real difficulty in the implementation of a national policy," he notes.

The proliferation of vineyards also makes it difficult to put in place a global action plan involving all areas, says Stefanos Koundouras, a researcher at the Faculty of Agriculture of Aristotle University in Thessaloniki.

"The consequences of global warming vary depending on the regions of Greece and the grape varieties. We cannot generalize," he insists.

"According to their characteristics, their cycles and the ripening time of the grapes, the grape varieties do not react in the same way to rising temperatures," Koundouras says.

For example, conditions are tougher in coastal areas or on islands such as Santorini, another important area of wine production in Greece.

Rising temperatures there make it difficult to control alcohol levels, says Koundouras, author of a 2017 study on the consequences of global warming on wine production in Greece.

Options currently available to wine growers, beyond choosing adaptable rootstock that seems to be the best solution, include improved irrigation, soil vegetation maintenance, and grape refrigeration.

But "nothing can be completely conclusive," says Koundouras.

For the time being, "wine growers still have a fairly limited knowledge of the issue", but "we will have to find solutions," he warns.