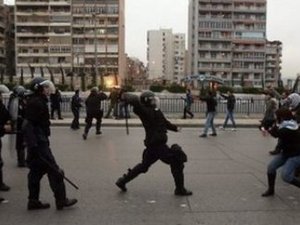 More than 100 demonstrators briefly clashed with police outside the Egyptian embassy in Beirut on Thursday after they tried to break through the security cordon around the diplomatic mission, a security official said.

"Police intervened to push back the demonstrators after they tried to break through the barbed wire in order to enter the embassy," the official told Agence France Presse, speaking on condition of anonymity.

He added that no one was arrested or injured during the clashes that lasted about 20 minutes.

The demonstration outside the embassy was organized by leftist activists, many of whom carried portraits of the late Egyptian President Gamal Abdel Nasser, Egyptian flags or Lebanese Communist Party flags.

Anti-riot police were seen using batons and rifle butts to disperse the protesters after they managed to remove the barbed wire around the embassy or jump over it late afternoon.

Army reinforcements were brought in and the barbed wire was put back in place after the clashes.

Similar demonstrations against the regime of embattled Egyptian President Hosni Mubarak have taken place in Beirut in recent days.