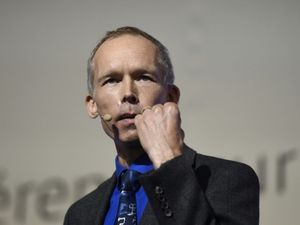 Johan Rockstrom, Director of the Potsdam Institute for Climate Impact Research (PIK), is a Big Picture scientist who strives to see how all the pieces of our planet's complex climate system fit together.

In 2009 he co-authored the "planetary boundaries" concept, which has since become a central paradigm for evaluating Earth's capacity to absorb the impact of human activity.

Rockstrom spoke with AFP at the COP25 U.N. climate conference in Madrid. Answers have been edited for concision and clarity.

Q: Is a viable solution to global warming compatible with consumer capitalism?There's a simple way to answer that question: we don't have a choice. On climate, the time is running out so fast that there's no other pathway. Either we make this work within the existing economic paradigm, or we fail.

It's naive to say 'Let's go for de-growth, let's completely divest, or let's think of post-capitalist model and throw GDP in the waste bin'. We have to work with the economic machinery that we have in our engine room.

Q: Why are fossil fuel companies reaching out to you, an Earth system scientist, for advice?The European-based oil companies -- such as Shell, BP and Equinor -- have not come to the point where they see the beginning-of-the-end of their business, but I'm sure that they recognize that we have a serious problem.

They are also very clever at engaging with the scientific community and allowing a high ceiling when it comes to entertaining different perspectives. But they still translate everything into their own conclusions, which are mostly aligned with Shell's "Sky Scenarios".

Their argument goes like this: 'We serve humanity by supplying modern energy. Economies need cheap energy because otherwise they just grind to a halt. Don't blame us, we're just providing exactly what you are asking for.'

The Sky Scenario says that even with a 50 percent reduction in global greenhouse gas emissions over the next 30 years, Shell can be aligned with science and the Paris Agreement without changing very much.

But this is an illusion that presumes the deployment of unrealistic levels of carbon capture and storage (CCS) -- a technology that siphons off CO2 as gas or coal is burned and stores it underground -- and tree planting. It is a feel-good strategy for the status quo.

Today we only have three, four, maybe five hundred billion tons of CO2 in our 'carbon budge' left to emit –- about 10 years' worth. There is no more room for this type of posturing. And yet companies are still making major natural gas and oil investments in the Arctic and elsewhere. This won't take us to a net zero economy in time.

Q: Could Earth flip from being a self-cooling to a self-warming system?We should humbly cherish the fact that the Earth system remains in net cooling mode. We are loading the planet with heat by burning fossil fuels. So far the Earth system has responded by dampening that heat.

First, land and oceans absorb 50 percent of emitted greenhouse gases. That's the biggest economic subsidy ever. Second, 90 percent of the excess heat we generate is taken up in the oceans. Third, ice sheets and the polar ice cap reflect 90 percent of solar radiation back into space.

So we have carbon sequestration, heat absorption and albedo -- whereby the Sun's energy is reflected back into space by mirror-like snow and ice -- as the three big cooling agents on Earth. This is what has kept the system so resilient during the Holocene interglacial period [over the last 12,000 years]. I call the planet's capacity to buffer abuse 'Earth resilience'.

The big nightmare is the moment when Earth can no longer cope and shifts from that self-cooling state to become a net-warmer. We don't know where that point is yet, but we see the mechanisms.

The moment, for example, Greenland's ice sheet melts to such a large extent that it forms a film of liquid on the surface. We have already seen periods when it becomes a net absorber of heat rather than a net reflector of heat. Not for more than a few weeks at a time, but it's starting to happen.

We are also starting to see something similar with land-based ecosystems. We have had years when Earth's entire land surface is no longer a sink but a net source of greenhouse gases.

The point when the Earth system flips from being a net cooler to a net warmer is when you cross tipping points. You could end up in a state where that resilience is weakened so much that the climate system no longer reduces human disturbance, but rather reinforces it.

That will be the moment when we have lost control.

One is the deployment time-scale -– when we push the 'on' button of irreversible change, whether for the melting of ice sheets and the permafrost, or conversion of the Amazon from tropical forest to savannah. The other is the full impacts time frame, which unfolds over centuries.

We need to avoid the first one. We don't want to push the 'on' buttons of runaway global warming. The next decade is our window to avoid coming too close to those pressure points.