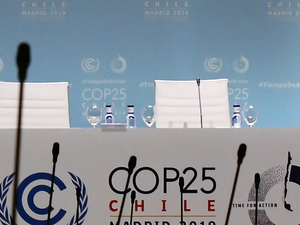 The climate summit in Madrid earlier this month did not collapse -- but by almost any measure it certainly failed.

Governments faced with a crescendo of deadly weather, dire alarms from science and weekly strikes by millions of young people were also expected to signal an enhanced willingness to tackle the climate crisis threatening to unravel civilization as we know it.

The result? A deadlock and a dodge.

The 12-day talks extended two days into overtime but still punted the carbon market conundrum to next year's COP26 in Glasgow.

The European Union was the only major emitter to step up with an ambitious mid-century target ("net zero"), and even then it was over the objection of Poland and without a crucial midway marker.

"The world is screaming out for climate action but this summit has responded with a whisper," noted Chema Vera, executive director of Oxfam International.

So what went wrong?

At least five factors contributed to the Madrid meltdown.

To an unsettling degree, the outcome of a UN climate summit -- where 196 nations must sign off on every decision -- depends on the savvy and skill of the host country, which acts as a facilitator.

The stars were not aligned for the chaotic Copenhagen summit of 2009 and the Danish prime minister's less-than-deft maneuvering did not help. By contrast, the 2015 climate treaty was in no small measure made possible by France's diplomatic tour-de-force.

This year, Chile's environment minister Carolina Schmidt wielded the hammer after the conference was moved at the last minute to Madrid due to massive protests on the streets of Santiago.

From Day One, when Schmidt's mishandling of a request from the African negotiating bloc mushroomed into a diplomatic incident, veteran observers worried that she was not up to the job.

A marginal factor, perhaps, but not a negligible one.

Among the nearly 30,000 diplomats, experts, activists and journalists accredited to attend the summit were hundreds of high-octane fossil fuel lobbyists.

They are collectively the elephant in the room: everyone knows what causes climate change but it is considered impolitic within the UN climate bubble to point fingers.

Even the Paris Agreement turns a blind eye: nowhere in its articles does one find the words oil, natural gas, coal, fossil fuels or even CO2.

"We need to engage with them," UN Climate executive secretary Patricia Espinosa told AFP when asked whether it was time to exclude such lobbyists from the room.

"There is no way we will achieve this transformation without the energy industry, including oil and gas."

But the incongruity of their participation in a life-and-death struggle to wean the world from their products has become harder to ignore.

"The UN climate negotiations should be the one place that is free from such fossil fuel interference."

On November 4, 2020 -- the day after US voters will renew Donald Trump's mandate or turn him out of office -- the United States is set to formally withdraw from the Paris Agreement.

It will be the second time that a Republican White House has plunged a dagger in the heart of a climate treaty nurtured by the Democratic administration that preceded it -- the Kyoto Protocol was the previous one.

From the moment Trump was elected -- on Day Two of COP22 in Marrakesh -- advocates of climate action have played down the negative impact of the world's largest economy and second biggest carbon polluter pulling out of the Paris deal.

But the corrosive "Trump effect" was palpable in Madrid, as was the anger at Washington for twisting arms even as it walked out the door.

"There are one or two parties that seem hell-bent on ensuring any calls for ambition, action and environmental integrity are rolled back," said Simon Stiell, Grenada's environment minister.

Rich nations have promised developing ones $100 billion (90 billion euros) annually starting next year to help them adapt to future climate impacts, but there is no provision in the 1992 bedrock climate treaty for damages already incurred.

No one, it seems, imagined that climate talks would drag on for 30 years.

"The U.S.-China-EU climate tricycle has had a wheel pulled off by Trump," he told AFP. "Going into 2020, it is critical for the remaining two wheels to roll in sync."

When it comes to climate change, Beijing holds the fate of the planet in its hands.

China accounts for 29 percent of global CO2 emissions, more than the next three countries -- the US, Russia, India -- combined, according to the Global Carbon Project.

The core commitment of China's voluntary carbon cutting plan, annexed to the Paris treaty, is to stabilize its CO2 output by 2030.

Experts agree that China could hit that mark earlier and more countries are asking Beijing -- ever so gingerly -- to promise it will.

Granada's minster Stiell called out half-a-dozen rich and emerging economies -- including China and India -- for not revising their voluntary plans in line with a world in which warming does not exceed 1.5 degrees Celsius.

Failure to do so, he said, "shows a lack of ambition that also undermines ours".

"China’s emissions, like the rest of the world's, need to peak imminently, and then decline rapidly," for the world to stay under 1.5C or even 2C, according to the Climate Action Tracker, a consortium that analyses climate commitments.

But Beijing has been coy about its intentions. Going into Madrid, it hinted at a revised target ahead of COP26.

But during the Madrid meeting, China dug in its heels and --  backed by India -- invoked the principle that rich countries must take the lead in addressing climate change, calling out their failure to deliver on promises made.

"Ambition of Parties is measured first and foremost by the implementation of its commitments," said a joint statement from China, India, Brazil and South Africa.

The statement said commitments made by developed countries in the pre-2020 period -- especially for money and technology -- must be honored.

China's lack of enthusiasm is also rooted in changes on the domestic front.

"When an economy slows, it is more difficult to be as single-minded about leadership on climate change," said WRI's Andrew Steer referring to China's position.

China is only likely to follow with measures of its own if the European Union confirms its mid-century "net zero" goal and vows to slash emissions by at least 55 percent by 2030, several experts said.

"If the EU doesn't come through, we're screwed," said one observer with more than 20 COPs under her belt.

- Spitting into the wind -

Perhaps the most daunting headwind facing UN climate talks is rising nationalism, populism and economic retrenchment -- all at the expense of the multilateralism.

"The stalemate over carbon markets is a symptom of a more general polarization and lack of cooperation among countries," said Sebastien Treyer of the IDDRI think tank in Paris.

Street protests, meanwhile, against the rise in cost-of-living in France, Colombia, Chile, Ecuador, Egypt and more than two dozen other countries in 2019 have given governments already reluctant to invest in a low-carbon future another reason to balk.

"These cases highlight how sensitive populations are to change in the price of basic commodities like food, energy and transport," noted Stephane Hallegatte of the World Bank.

"This is the context in which most countries have committed to stabilize climate change."

Even the diplomats and activists deeply invested in the UN climate process have begun to wonder if it is fit for purpose.

Negotiations are transactional by nature, and may not be suited to an emergency situation, some noted.

"We are standing and watching our house on fire," said Steer from the WRI.

But nations with the most to lose have few alternatives.

"It is the only space where poor countries -- who have done the least to pollute and yet are suffering first and worst from its destruction -- have a voice," said Power Shift Africa's Mohamed Adow.

"But, sadly, it is proving inadequate."

The key to unlocking the diplomatic deadlock may lie within civil society, said Johan Rockstrom of the Potsdam Institute for Climate Impact Research (PIK), who wonders whether a wave of moral outrage could push governments toward more decisive action.

"Are we approaching a tipping point where it will no longer be acceptable to shorten the lives of people with fossil fuel pollution?", he asked, noting that breathing the air in the Indian capital New Delhi is like smoking 10 cigarettes a day.

If their numbers rise to tens or hundreds of millions, maybe leaders in democratic and autocratic governments alike will begin to take note.