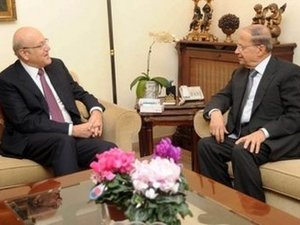 Free Patriotic Movement leader MP Michel Aoun stressed on Thursday after meeting Prime Minister-designate Najib Miqati that "the phase of making an agreement over the distribution of portfolios in the new government has not been reached."

He instead said that the discussions over the formation of the Cabinet are still underway.

"We don't want the obstacles that toppled the previous government, therefore we need the minimum amount of harmony in rule," the MP emphasized.

Aoun denied that he had placed conditions on Miqati or demanded certain portfolios, adding: "Are you asking me to reach no result? I don't want anything, let the government be formed without me or let it be comprised of ministers from the previous Cabinet."

"I did not talk to President Michel Suleiman about ministries and I did not talk with Miqati about the names of potential ministers," Aoun stated.

"Our meeting today confirmed that all claims of a dispute with the premier-designate are not true," he stressed.

Miqati is reportedly facing stiff demands by Aoun to be granted the majority of Christian seats in the new government.

Miqati's brother, Taha, met with Aoun in Rabiyeh on Tuesday. An Nahar daily said the FPM leader sent a message to the prime minister-designate that he wants a big share that "suits the size of his parliamentary bloc and his popular representation."

Pan-Arab daily al-Hayat said that Aoun is asking for the majority of Christian cabinet seats (11 ministers) and is demanding the right to give his opinion on the rest of the Christian representation.

Another demand is not to give President Michel Suleiman any share in the government, a request that the remaining March 8 forces are making, al-Hayat said.

The newspaper said that Aoun insists on giving the interior ministry portfolio to an FPM member of his choice.

The daily quoted sources following up contacts aimed removing obstacles hindering the cabinet formation process as saying that Miqati is facing demands by Aoun, his ally Marada movement leader Suleiman Franjieh and President Suleiman to be given the interior ministry.

Suleiman reportedly prefers to keep the portfolio as part of his share in the cabinet out of keenness on the political balance in the country.

When asked by the Qatari al-Watan daily if he is demanding to get a "sovereign" portfolio, Aoun said: "Of course I will get a sovereign portfolio. There are four sovereign portfolios: the defense, foreign, finance and interior" ministries.

As Safir daily also said that Franjieh is asking for a portfolio given that Marada's representative in the last cabinet was a state minister. Franjieh believes that his movement has the right to get two ministers if a 32-member government was formed.