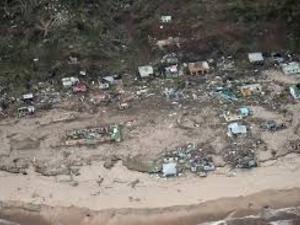 Tropical Cyclone Sarai barreled off the coast of Fiji early Saturday, forcing hundreds of residents to move to higher ground ahead of possible flooding.

The Category Two storm passed off the southwest of the main island of Viti Levu with forecast average winds of 95 kilometers per hour (60 miles per hour) and gusts of 130 kph at the center of the storm.

The Fiji Meteorological Service warned of "damaging gale force winds" and heavy rain with coastal flooding expected in some areas as the cyclone intensified late Friday.

Around 360 people went to 15 evacuation centers across the country, the National Disaster Management Office said, as flash flood warnings were put in place.

Meanwhile, the plans of thousands of tourists who flock to the South Pacific island nation over the Christmas-New Year holiday period were upended as flights were cancelled or delayed.

Many day cruises around the islands have been called off while Fiji Airways has cancelled several inter-island flights, and flights to Australia and New Zealand.

Flights to the United States have been brought forward several hours to avoid the advancing cyclone.

In February 2016, 44 people were killed when Cyclone Winston destroyed tens of thousands of homes and caused an estimated US$1 billion in damage when it hit Fiji.