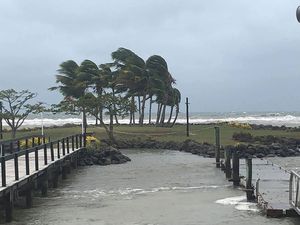 The cyclone damaged houses, crops and trees, cut power and forced the cancellation of several international flights, stranding holidaymakers visiting the island nation, which is a major tourist draw.

"The man is believed to have been swept away by strong currents when he was swimming with his friends," she said.

The body of a man in his 40s was found on Sunday off the coast of the main island Viti Levu a day after he was swept away by strong currents when crossing a river.

Another person was in intensive care in hospital after being hit by a falling tree.

Soko said that at the height of the storm, there were 2,538 people packed into 70 evacuation centers although by Sunday evening 500 had been cleared to return home.

Electricity was restored to 80 percent of the capital Suva but power company Energy Fiji Limited said it could take a week to restore supplies to all areas of Viti Levu.

Sarai, maintaining winds of up to 150 kilometers per hour (93 miles per hour), was tracking east and was expected to pass over Tonga on New Year's Eve.