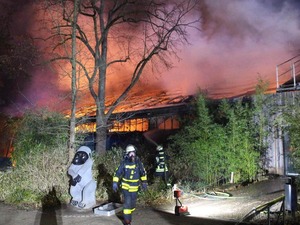 Flames from flying New Year's Eve lanterns might have sparked a blaze that killed dozens of monkeys at a zoo in northwestern Germany, management and security services said Wednesday.

The blaze tore through the monkey enclosure shortly before midnight, killing at least 30 animals, including orangutans, chimpanzees and marmosets, police said.

"Our worst fears have been realized," Krefeld zoo, which specializes in primates, announced on its Facebook page.

Firefighters prevented the flames from spreading to other buildings at the zoo in North Rhine-Westphalia.

Preliminary findings from an investigation suggest the fire might have been caused by flying paper lanterns, which float into the air when lit.

These types of devices have been banned in the region since 2009.

Police launched an investigation for "negligently criminal fire" and hope to establish the path of the lanterns by analyzing atmospheric conditions and wind direction.

The German animal protection association quickly called for all kinds of fireworks to be banned near zoos, farms and kennels.

The deadly blaze was "terrible proof of the dramatic consequences for animals" from "uncontrolled" celebrations, the group said.

Germans often use powerful fireworks to celebrate the New Year, and in Berlin, rescue services on Wednesday had recorded 22 injuries, some of which required amputations, from the holiday.

That was roughly comparable to levels seen in previous years.

The atmospheric effect of fireworks has also begun to spark debate, and the federal environment agency UBA estimated that the amount of fine particles released in one night was comparable to the amount caused by two months of highway traffic.

Demand remains strong for now however, with the population spending around 113 million euros ($127 million) this year for New Year's fireworks, the same amount as last year, according to sector federation VPI.

Around 57 percent of the county's inhabitants would support a ban on firework sales, but 84 percent of those questioned also said they looked forward to displays next year.

Meanwhile, the Krefeld zoo planned to remain closed Wednesday with employees "in shock" owing to the "terrible tragedy", the management said.