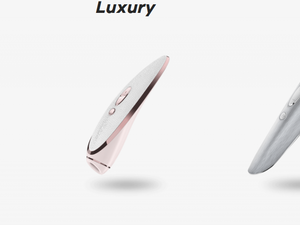 Sex toys are for relaxation. For education. For healing after childbirth. For long-term or long-distance relationships. For women's emancipation.

And also... for pleasure.

But manufacturers aiming for respectability tend to save this argument for last.

"Sex toys have an extremely negative connotation," said Jerome Bensimon, president of Satisfyer. "So we've rebranded ourselves as a 'sexual wellbeing company.'"

The company has gained attention for its pressure wave technology used for clitoral stimulation, and has plans to launch a smart phone app for controlling sex toys, in particular by using voice commands.

At its booth at the Consumer Electronics Show in Las Vegas, vibrators and Ben Wa balls sit alongside mini vibrators shaped like ice cream cones.

After some ups and downs, "sex tech" is testing the waters this year.

As recently as last year the display likely would have been banned.

At the 2019 show, the Consumer Technology Association, which runs the expo, stripped the Ose massager of an award for innovation, saying it was disqualified for being "immoral," "obscene" and "profane."

After an uproar, the CTA reversed itself and returned the prize to Lora DiCarlo, the company which manufactures the Ose.

Sex toys "are consumer electronics just like any other but are not treated like that," said Janet Lieberman-Lu, co-founder of Dame Products, which manufactures small devices for clitoral stimulation.

Given their widespread use, "sex toys are by definition mainstream.... They're more adopted than a lot of products at CES."

Her company has taken New York City's public transportation system to court, complaining that it allows advertisements for erectile dysfunction medications and ads that contain humorous references to sex -- but not for sex devices.

"That's what leads to rape culture."

Entrepreneurs in this industry, many of whom started out in conventional consumer electronics, medicine or cosmetics, say pleasure and health go hand-in-hand.

Given that school textbooks only recently began including information on the shape and size of the clitoris, they say they are on a mission to educate the public.

It is often "much easier to talk about health than pure pleasure, which can involve fear of rejection," said Soumyadip Rakshit, CEO of Mystery Vibe, which develops vibrators that deal with both erectile difficulties in men and postpartum vaginal scarring in women.

To open up, people often need a catalyst.

"Everyone is keen to talk about it but no one wants to be the first," he said.

"If someone does that for them, a company, an article, a doctor... it makes that so much easier."

The tubular objects have internal sleeves and are pink when intended for straight users and translucent for gay users.

Lovense also is developing a virtual reality game for the male sex toy with female characters. Visitors have to imagine the contents, however, since the imagery, even if artificial, is not allowed during the consumer expo.

But the "sexual wellbeing" industry, which could swell to nearly $40 billion by 2024, according to a forecast from market research firm Aritzon, may have good reason to maintain an air of mystery and controversy.

"When we did our presale with Ose, after its long-awaited release at the end of November, we hit our yearly sales goal in five hours," she said, as she road aboard a transparent mobile showroom plying the streets of Las Vegas during the show.

The roving booth, like a fishbowl on wheels, displayed the catch phrase: "The pleasure is all yours."