Mubarak: If I Resign Today There Will Be Chaos 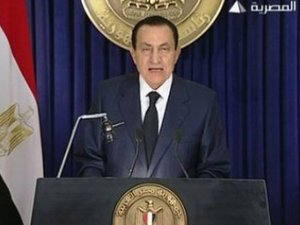 Egyptian President Hosni Mubarak said Thursday in an interview with ABC television that he wants to leave office, but fears there will be chaos if he resigns.

The beleaguered Egyptian leader said he was "fed-up with being president and would like to leave office now, but cannot … for fear that the country would sink into chaos," ABC's Christiane Amanpour reported after their 20-minute interview in Cairo.

Mubarak, who has vowed not to stand in upcoming elections, has come under increasing pressure from the United States and the West to step down amid 10 days of violent protests against his 30-year rule.

But he said he had told U.S. President Barack Obama "you don't understand the Egyptian culture and what would happen if I step down now."

"I don't care what people say about me. Right now I care about my country, I care about Egypt," Mubarak added.

The veteran leader went on to say: "I was very unhappy about yesterday. I do not want to see Egyptians fighting each other."

He told his interviewer that his government was not responsible for the violence in Cairo's Tahrir Square, blaming the opposition Muslim Brotherhood for the incidents.

The interview took place in the heavily-guarded presidential palace in Cairo, with Mubarak's son Gamal seated at his side, ABC said.

He told Amanpour that he had felt relief after announcing in an address to the nation on Friday that he would not run again for the presidency.

Asked by Amanpour how he was feeling, the veteran leader replied: "I am feeling strong. I would never run away. I will die on Egyptian soil."