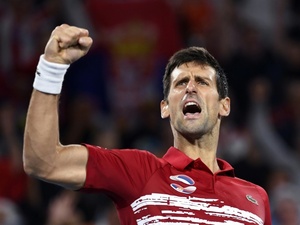 A fresh Djokovic returned to Sydney's Ken Rosewall Arena for the deciding doubles but Nadal opted not to, saying his energy levels were too low, with Feliciano Lopez partnering Pablo Carreno Busta.

But they proved no match for Djokovic and Viktor Troicki, who bounced back from a break down in the first set to romp home 6-3, 6-4 and ensure Serbia was the last country standing from the 24 that began the season-opening event.

"I'll remember this experience for the rest of my life. It's one of the nicest moments in my career," said Djokovic, who close to tears after winning the doubles.

"I've been very fortunate to have an amazing career these last 15 years, but playing for the team, playing for my country with some of my best friends for a long time, you can't match that. It's too special."

The doubles drew the curtain on an event that proved a big hit with players and fans, dishing up competitive matches driven by the passion of athletes representing their home countries.

Some US$15 million in prize money was at stake along with up to 750 singles and 250 doubles ATP rankings points, with new rules trialed including on-court coaching and team zones in the corners of the court.

Djokovic, warming up for his bid to win an eighth Australian Open crown this month, went into his clash with Nadal leading their head-to-heads 28-26.

But the statistics did not tell the full story.

The Serb had won nine of their past 12 contests and been dominant over the years on hard courts -- including a comfortable win against Nadal in the Australian Open final last year.

He showed his intent immediately and broke Nadal in the opening game with no let-up, as his driving groundstrokes and deft touches proved too much.

It went to a tiebreaker where a crunching backhand down the line from the Serb gave him the break he needed to complete the victory.

"Every time I play Rafa we get to play a lot of exciting points," Djokovic said. “We had some incredible exchanges."

Nadal said he was happy with the way he fought back in the second set.

"I had my chances. I was very close. I'm not happy with the loss, of course, but the feeling in that second set is positive," he said.

"Probably today was maybe a little bit too early in the season," he added.

Bautista Agut was a class above Lajovic, ranked 34, also earning the distinction of going through the tournament unbeaten.

Efficient and emotionless, he got off to a flyer, racing into a 3-0 lead as the Lajovic struggled to find any rhythm. But he finally settled and hauled himself back into the set.

It went with serve until the Spaniard's dominance from the baseline earned him two more break points in the 12th game and he took the set.

The Serbian lost confidence as Bautista Agut raced to victory, with his unrelenting consistency proving too much.

"He was aggressive and stepping inside the baseline to manage the game, but I believed I could change it and I played a great end of the first set and a great second set," said Bautista Agut.