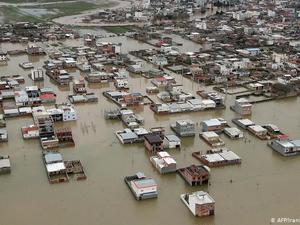 "So far three people have been confirmed dead and one has been reported missing," Press TV, the English-language service of state television, reported on its website.

They have so far been unable to reach the town of Qasr-e Qand and 40 surrounding villages in Sistan-Baluchistan, said governor Rahimbaksh Pakandish, cited by IRNA.

Five hundred villages were affected and thousands of homes destroyed or damaged in the southeastern province, IRNA reported, adding that 285 families were given emergency shelter in Red Crescent tents.

"More than 20,000 people in villages of Sistan-Baluchistan province have lost their homes because of flooding or are surrounded by water," Deputy Health Minister Alireza Raisi was quoted as saying.

In Kerman province, roads were severed and 40 villages suffered damage, while in Hormozgan province 61 people were rescued.

The amount of rain that fell in the southwestern province of Hormozgan since Friday was "unprecedented", the semi-official ISNA news agency reported.

Floodwaters had surrounded more than 50 villages in the Gulf province.

The flood disaster is the worst in Iran since at least 70 people were killed across 20 provinces in April.