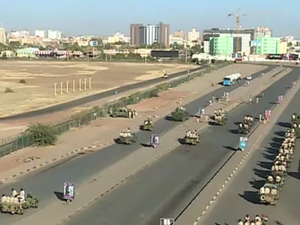 Heavy gunfire erupted in the Sudanese capital Tuesday as agents of the country's long-feared security agency rejected financial compensation offered as part of a restructuring plan proposed by the new authorities.

Shooting broke out at some bases of the Directorate of General Intelligence Service, formerly known as the National Intelligence and Security Service (NISS), the powerful security arm of longtime Islamist autocrat Omar al-Bashir.

NISS agents were at the forefront of a crackdown against protesters during the nationwide uprising that erupted against Bashir in December 2018 and led to his ouster by the army in April.

Witnesses and an AFP correspondent reported that gunfire broke out at the agency's bases in Riyadh and Khartoum North.

All streets leading to the two bases were cordoned off, causing traffic jams, witnesses said.

The AFP correspondent also said several vehicles carrying soldiers and troops from the country's Rapid Support Forces had headed towards the bases.

A statement issued by the security agency said it was "assessing the situation."

"In the process of restructuring NISS there are some members who have rejected the financial compensation offered for retirement," it said.

A security source told AFP that the first shooting broke out in the city of Al-Obeid after which gunfire erupted in the agency's bases in Khartoum.

"Negotiations are now on to solve the issue as they have financial demands," the source said on condition of anonymity.