Mustaqbal Urges Aoun, Diab to Free Themselves of 'Pressures of Politics, Parties' 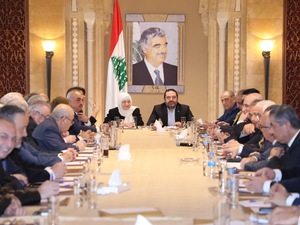 Al-Mustaqbal parliamentary bloc on Tuesday called on President Michel Aoun and Prime Minister-designate Hassan Diab to liberate themselves of “the pressures of politics and parties” as to the formation of the new government.

“The return to bickering over jurisdiction and the required standards for the formation of the government represents the peak of disregard for the economic and financial threats facing the country,” said the bloc in a statement issued after its weekly meeting.

“There is insistence on the policy of evading the changes imposed by the popular protests,” the bloc decried.

It accordingly emphasized that the priority should be securing the formation of the government as soon as possible and putting an end to the spat over ministerial shares.

“The bloc believes that the ongoing confusion over the formation of the government puts the full responsibility on the shoulders of the president and the PM-designate, who are constitutionally concerned with agreeing on the line-up and issuing decrees, and it is a responsibility that must be freed of the pressures and politics and parties,” Mustaqbal added.

Noting that the formation of a government is the pressing need, the bloc warned that it is not appropriate to keep the caretaker cabinet indefinitely in power in the face of the country’s multiple crises.

Caretaker “PM Saad Hariri has not and will not refrain from shouldering his constitutional and national responsibilities in this regard,” Mustaqbal added, while calling for “reining in the suspicious hands that are distributing ministerial portfolios,” in a veiled jab at MP Jamil al-Sayyed.

This picture is priceless... not with genuine good guys..

No one could possibly predict how much these corrupts have between them..
Priceless on the back of THEFT..

Urging all members of Future movement, seriously get real.. these guys are the same and nothing will change to help you or your hurt.. they remain lying to you all and to the Lebanese..

Like the Kataeb who always whinge and point and claim "others".. Future has become worse