Protesters outside Diab's House Give Him 48-Hour Ultimatum 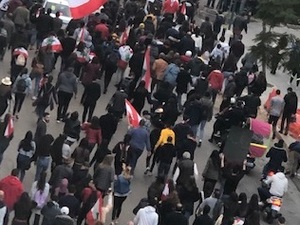 "Rebel, Beirut," hundreds of protesters chanted as they marched to the sound of drums towards the home of Premier-designate Hassan Diab on Tuesday, as demonstrators blocked roads across the country in what they dubbed the beginning of a “week of wrath”.

Diab has struggled to form a cabinet since he was named on December 19, amid continued bickering among political parties.

"I want a government that can resolve the economic crisis as quickly as possible," said Nour, a 31-year-old marcher.

Others chanted slogans condemning Diab’s designation, saying he was appointed by the same political parties against whom they have been protesting since October 17.

The protesters also set a “zero hour” for further escalation, giving the PM-designate a 48-hour ultimatum to form a government of specialists or resign.

They warned that a “new phase” would begin should their demands be disregarded.

Although protests had declined in size in recent weeks, demonstrations have been ongoing since October, increasingly targeting banks and state institutions blamed for driving the country towards collapse.

The unprecedented cross-sectarian movement since October 17 has been fueled by a crippling economic crisis, the worst since Lebanon's 1975-1990 civil war.

The protesters are demanding a new government made up solely of independent technocrats, but analysts warn this may be a tall order in a country ruled by a sectarian power-sharing system since the end of the civil war.

The World Bank has warned of a recession that may see the proportion of people living in poverty climb from a third to half the population.

Even before the protests began, economic growth in Lebanon had slowed sharply in the face of repeated political deadlocks in recent years, compounded by the war in neighboring Syria.

And without golden parachute!

Not a Diab fan, but I think it would be best to let HIM pick the ministers not Berri Bassil and the rest of the 'kellum'. He had some good names at the beginning near the new year like Ziad Baroud for justice minister, and just like that, the gang of thieves started putting in their own candidates.

And no we don't need a political government Berri, Kizb and whoever else thinks so--that is what got us in this mess in the first place.

Ziad Baroud is no better than the rest of the clique. When he was minister, did he denounce who prevented him from achieving his objective ? Did he name them in person! ? No!!! There’s a solidarity amongst thieves,Ziad Baroud is part of the corrupt ruling class.

Thousands of Lebanese have graduated from CalTech, Harvard, Cambridge and the other best unis in the world and these Lebanese have no ties whatsoever with the filthy corrupt ruling class.

The father of a friend responsible for road constructions was asked to remove layers so Berri could pocket the difference, the guy resigned full stop. Some people still have integrity you know but your pal Baroud is no good. The maid said “mr no good” and I trust her jugement.