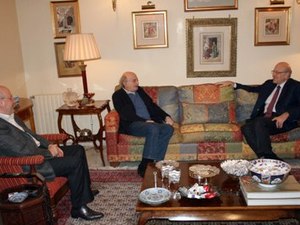 Jumblat declined to make a statement after the meeting. However, MTV reported that talks between the two men did not tackle the distribution of portfolios in the new cabinet.

According to the TV network, Jumblat expressed to Miqati his total support for any efforts aimed at forming a "national unity government."

On Wednesday, Miqati visited President Michel Suleiman to inform him about the demands of the March 8 and 14 forces concerning the upcoming cabinet, An Nahar daily said.

The newspaper quoted sources as saying that both officials agreed to give contacts more time to exhaust all efforts to form a national unity cabinet or a national salvation government that includes both coalitions.

Suleiman's visitors told An Nahar that he wasn't asking for shares in the government and was neither seeking to give a portfolio to his relative Wissam Baroudi.

His aim is to cooperate with Miqati to guarantee the formation of a "balanced and constitutional" cabinet that relieves all sides, the visitors said.

The president is also keen on having a government that is productive and guarantees stability, they added.

Miqati's sources told As Safir daily that the PM-designate will continue to exert all efforts to form a unity cabinet.

However, sources following up consultations between Miqati and different sides told the newspaper that March 14 forces are split between those calling for non-participation in the cabinet and those wanting to take part to prevent the March 8 team from making any step that would jeopardize the international tribunal.

A political source told The Daily Star that Miqati was expected to meet with Nasrallah soon to discuss the government's formation and other issues.

When asked by pan-Arab daily al-Hayat on when his line-up would be ready, Miqati said: "I am interested in having a comforting line-up. When we reach that step, I will consult with President Suleiman and we will unveil it."

"The issue is not about speed or procrastination," he said.