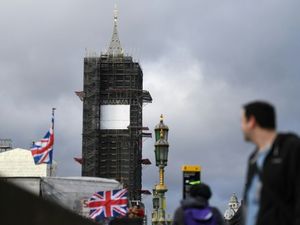 Britain's bewildering battle to get Big Ben to bong for Brexit is becoming brutal -- and big-budget to boot as public cash donations flooded in Friday for a celebratory peal.

Big Ben has been mostly silent since restoration work on parliament's Elizabeth Tower, which houses the clock, began in 2017.

Parliamentary authorities say the floor in the tower workers use to look after the bell has been removed and the ringing devices taken out.

Putting it all together again in time would apparently cost up to £500,000.

Prime Minister Boris Johnson chimed into the debate by proposing a crowd funding campaign that keeps taxpayers from getting stuck paying around £50,000 a bong.

The House of Commons Commission that runs parliament ruled that out citing it as breach in rules on financial donations. But that has failed to stop the flow of cash to a GoFundMe campaign.

But it might be a wasted effort in what some are decrying as a very British "farce".

Arch-Brexiteer Nigel Farage stepped up to accuse Johnson's government of being "embarrassed by Brexit".

"I can see us being mocked all over the world: 'Britain leaves the EU and they can't even get a clock to ring'," he told the domestic Press Association news agency.

Some commentators were left red-faced as well -- for a slightly different reason.

"Something deeply embarrassing is happening in our country," the pro-Brexit Spectator magazine wrote.

"I never cared about Big Ben being rung until people who I think really ought to know better decided they did," one of its columnists said.

Others thought the jokes and puns pointed to a larger problem for Johnson's government as it sets off on difficult post-Brexit negotiations with Brussels.

"Will this be the first big challenge to the PM from the party's hardline Brexiteers?" Politico magazine asked in reference to a group who helped sink former prime minister Theresa May's government.

"It was only a matter of time."