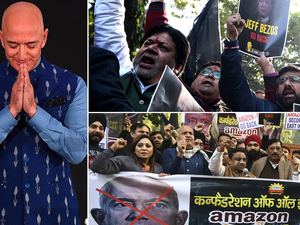 Amazon boss Jeff Bezos on Friday promised to create a million new jobs in India in a farewell love letter to the country, after ending a tough visit that reportedly included a snub by Prime Minister Narendra Modi.

Hundreds of small traders staged protests during his visit to the giant South Asian market this week, which came as anti-trust authorities launched a probe into the e-commerce behemoth and its main rival Walmart-owned Flipkart.

A government minister dismissed Bezos's announcement that Amazon would invest $1 billion, and a leading ruling party member hit out at his ownership of the critical Washington Post.

"I fall more in love with India every time I return here. The boundless energy, innovation, and grit of the Indian people always inspire me," Bezos said in a farewell love letter to the country posted on Amazon's local website on Friday.

The $1-billion investment will "digitize micro and small businesses in cities, towns, and villages across India", he said, vowing Amazon would export $10 billion of Indian-made products annually and create one million new jobs by 2025.

Amazon has invested heavily in India offering goods and entertainment to its 1.3 billion consumers, with monthly subscription to Amazon Prime costing just 999 rupees (around $14) a year.

But it and Walmart -- which bought Flipkart for $16 billion in 2018 -- have been accused of driving small firms out of business by selling heavily discounted goods at a loss to win market share.

Bezos reportedly wanted a meeting with Prime Minister Modi during his visit -- which also saw him hobnob with Bollywood stars in Mumbai -- but it was unclear whether he met any leading government member.

"Where did the loss come from? How can a market place make such a loss unless they are engaging in predatory pricing or some unfair trade practices," Goyal said at a New Delhi conference.

The Indian government has also been angered by the editorial stance of the Washington Post, which is owned by Bezos, the world's richest man, particularly over New Delhi's actions in disputed Kashmir.

Vijay Chauthaiwale, the head of the BJP's foreign affairs department, was quoted by local media as saying that he was "definitely against what the Washington Post is writing."