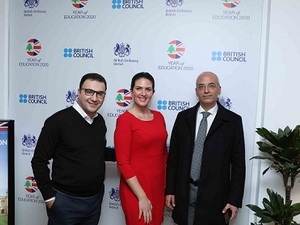 British Ambassador to Lebanon Chris Rampling welcomed his guests last week to celebrate the third annual reception for the Alumni Association of Lebanese Graduates of UK Universities, a press release said on Tuesday.

Guests representing some of the most talented and successful Lebanese graduates of UK universities across Lebanon: lawyers, human rights activists, economists, entrepreneurs, tech, business people, politicians and much more attended.

‘What makes this year’s annual reception extra special is that 2020 is the UK-Lebanon Year of Education campaign. Education has been at the heart of the embassy’s work for a number of years placing the UK amongst the top education donors in Lebanon. The UK is a global leader in the field including in science, technology and research. More and more Lebanese students want to come to us - in the last five years there has been a 90% increase in the number studying there.

Times are tough at the moment in Lebanon, reforms are needed, and securing jobs is difficult. Things will have to change. Increased investment in education is the best way for changing and creating a better world and that is why the time is right to refocus on education. Tonight we are celebrating some of what showcases the UK and Lebanon’s strong standing partnership and the UK’s investment in Lebanon’s future.

We are celebrating the 3rd anniversary of the Alumni of Lebanese Graduates of UK Universities including our Lebanon Chevening Alumni family that is now over 200 alumni so far. We are proud that you have chosen the UK as a place to study and more proud to have heard from many how you are supporting the Lebanon you aspire to in your respective fields. You are in many ways contributing to the UK’s partnership with Lebanon for stability, security and prosperity. Thanks for making the alumni network a great success. And, despite the difficulties of today, we, your friends will remain with you for the long run.’

Ambassador Rampling also briefed his guests on the UK Lebanon Year of Education 2020 campaign that was launched in October 2019.