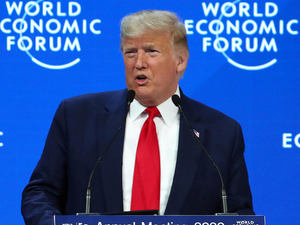 US President Donald Trump took aim on Tuesday at the "perennial prophets of doom" on the environment, telling the annual Davos forum that warnings of climate crisis were "foolish".

In a keynote speech to the 50th World Economic Forum in the Swiss ski resort, Trump touted fossil fuels, deregulation and a booming US economy -- a message in stark contrast to the dire warnings delivered by teenage campaigner Greta Thunberg and others.

"We must reject the perennial prophets of doom and their predictions of the apocalypse," Trump said hours after Thunberg told the World Economic Forum that governments had done "basically nothing" to reverse climate change.

With Thunberg in the audience, Trump branded those warning of out-of-control global warming and other environmental disasters "the heirs of yesterday's foolish fortune tellers".

Trump ticked off what he said were previous predictions that had been proved wrong, ranging from over-population in the 1960s to "an end of oil" in the 1990s.

"We will never let radical socialists destroy our economy," said Trump, apparently referring to his Democratic party opponents ahead of the presidential election in November.

Trump took the stage in Davos just after the Swiss president delivered a speech appealing for the world to care for the planet.

But the US leader heralded the United States as "number one producer of oil and natural gas".

He rattled off numbers indicating what he said were huge savings for American consumers and invited Europe to buy more US energy products.

The expansion of oil, gas and coal production has "been so successful that the United States no longer needs to import energy from hostile nations", he said.

"Our European allies no longer have to be vulnerable" if they "use America's vast supply".

Trump said the United States was joining a newly announced international initiative called the "one trillion trees" project and he said he wanted to conserve "the majesty of God's creation and the natural beauty of our world."

But he said technical innovation, not restricting economic growth, is the way forward.

"Fear and doubt is not a good thought process," he said.