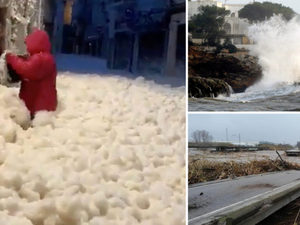 The death toll from a storm that has lashed Spain rose to four on Wednesday after the body of a man was found in a flooded area, officials said.

Police found the body in a zone in the southeastern province of Alicante where they were looking for a 67-year-old man who went missing when his car got swept up in a flash flood, said a local police spokesman.

"We still have not been able to confirm the identity of the person," he added.

Four people are still thought to be missing after Storm Gloria crashed into eastern Spain on Sunday with gusts of over 100 kilometers (60 miles) per hour,  snow, freezing rain and massive waves.

The storm is blamed for three other deaths, including that of a 54-year-old homeless woman who died of hypothermia and a 63-year-old man who was killed by flying roof tiles.

Officials are looking for four people, including a 25-year-old British man who went missing on Tuesday while on a beach in the north of the holiday island of Ibiza in the Mediterranean.

Ibiza is part of the Balearic Islands which were hit by waves on Tuesday which reached a record high of 14.77 meters (45.93 feet), according to the port authority.

Spanish media showed images of a powerful wave crashing over a seafront wall and sending water cascading toward the street and nearby buildings in Cala Ratjada in Mallorca, the largest island of the archipelago.

National weather agency Aemet said the storm was starting to abate on Wednesday although it kept the northeastern region of Catalonia and the Balearic Islands on alert.