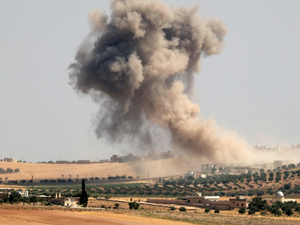 The European Union on Thursday condemned renewed fighting around a rebel stronghold in northwest Syria, demanding an end to "unacceptable" air strikes that have killed civilians.

The regime of President Bashar al-Assad, backed by Russia, is tightening the noose around Idlib, the last major rebel-held bastion in Syria's civil war, with air strikes killing at least 23 civilians on Tuesday.

"The renewal of the offensive in Idlib, including repeated air strikes and shelling targeting civilians are unacceptable and must cease," an EU spokesman said in a statement.

"The EU will keep the sanctions against the Assad regime under review as long as these brutal attacks continue."

Most of Idlib and parts of Aleppo province are still controlled by factions opposed to Assad.

The Damascus regime, which controls around 70 percent of the country after nearly nine years of war, has repeatedly vowed to recapture the region.

Idlib hosts at least three million people, many of whom have fled other parts of the country and are in need of urgent humanitarian assistance.

The EU demanded "rapid, safe and unhindered access" for humanitarian organisations and stressed the need for a political solution to the conflict.

The surge in violence comes despite a ceasefire announced by Moscow earlier this month that never really took hold, and there are warnings that a ground offensive could be imminent.