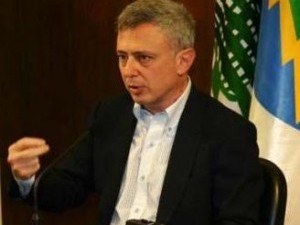 Marada movement leader Suleiman Franjieh has stressed he would participate in the cabinet only if he gets two portfolios and said the country needs “tough men” and not technocrats.

“If they don’t give me (2 portfolios) I will say thank you and won’t participate,” in the government, Franjieh told Marcel Ghanem’s Kalam al-Nass talk show on LBC TV network.

Prime Minister-designate Najib Miqati is likely to form a technocrat-politicians mixed cabinet “but in this country there are no technocrats. It needs strong men and scoundrels,” the MP said.

“Who should we put (as interior minister to confront) Wissam al-Hassan and Ashraf Rifi?” Franjieh asked. “I like Ziad Baroud a lot but he can’t confront Rifi and al-Hassan.”

Turning to the possible participation of the March 14 forces, the Marada leader said: “If the other team participates we want to get the two-third” of ministers.

Franjieh also unveiled that Free Patriotic Movement leader Michel Suleiman informed him through Caretaker Energy Minister Jebran Bassil that if got the interior portfolio he would not have another candidate in the ministry.

Aoun also told him that if Franjieh rejects the interior ministry, he would ask for the portfolio for one of his bloc’s members.