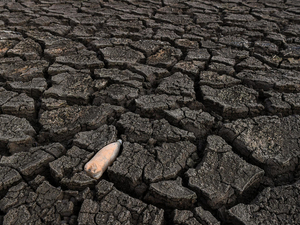 Forced to "live without water, in the 21st century, in a European Union country": Bulgarian Yana Stoyanova is not bemoaning climate change, but the incompetence of the authorities which has left some 100,000 people with an acute water shortage.

Accountant Stoyanova does not live in an isolated backwater, but around 30 kilometers (19 miles) from the capital Sofia.

She is at the sharp end of a crisis which has led to the environment minister being charged with mismanagement and forced to resign.

It also prompted a parliamentary vote of no confidence on Wednesday in the government -- which it survived.

But the scandal has fed public anger at the failures of those running the EU's poorest country.

The western Bulgarian city of Pernik should have a plentiful supply of water from the nearby Studena dam.

However, the reservoir there is practically empty, with most of the bed now lying exposed.

Pernik residents meanwhile are receiving murky, undrinkable water -- and even that only between 4pm and 10pm (1400-2000 GMT).

For three months now, the daily routine for 36-year-old Stoyanova and her electrical engineer husband has revolved around the shortage.

"When we get back from work at 7pm, we run to take a shower and try to wash everything before 10pm," she explains, with buckets and containers being filled before the taps run dry.

"I try to cook with mineral water, I wash dishes with it and of course I only drink mineral water," says 56-year-old Adelina Ivanova, who has to haul the bottles up seven flights of stairs.

"The meaning of your life in a given day is: 'Will I manage to take a shower?', and being so happy when you do," Ivanova says.

"It's absurd for a civilized person to be reduced to that."

Bulgaria has had a drier winter than normal and during 2019 received 25 percent less rainfall than average, in what was the second-hottest year on record.

But residents are clear on where they place the blame for the crisis.

"We are victims of negligence and corruption, not the climate," sighs 67-year-old Ivan Dragov, who used to work in the area's water distribution network.

Prosecutors accuse the former Environment and Water Minister Neno Dimov of ignoring warnings about the falling water levels at the reservoir, as well as continuing to allow a local steelworks to draw water from it.

"Thirty years ago, around a dozen businesses were operating in the area and the water level was monitored daily," says Dragov, adding that there were no shortages for residents back then.

Pernik's former mayor has also been charged with abuse of power over her refusal to enforce rationing during her campaign for re-election last autumn -- which she went on to lose anyway.

On Saturday, hundreds of residents took their anger to government headquarters in Sofia, shouting "resign!", "killers!" and "Mafia!"

The crisis in Pernik has also thrown a spotlight on Bulgaria's dilapidated water infrastructure, which results in around 60 percent of water being lost through leaks.

The new Environment Minister Emil Dimitrov has compared the network to a "bottomless barrel".

The leaks leave up to 315,000 people -- in a country of seven million -- facing regular water shortages, particularly in summer.

The government has said that cutting down on these losses is a priority, and has pledged 900 million euros ($990 million) to renew this infrastructure in the next two years.

However, the total cost of bringing it up to scratch is estimated at six billion euros.

If the situation in Pernik does not improve, authorities have warned that water could run out completely by April.

Even to maintain the current six hours of daily supply, the government is having to divert water from another reservoir, with 13 kilometers of pipes still needing to be installed to complete the link.

As for Stoyanova, the crisis has only confirmed her bleak opinion of her country's situation.

She is encouraging her daughters, aged 5 and 9, to learn English.

"They don't have a future here. We're preparing them to leave Bulgaria as soon as they're adults."