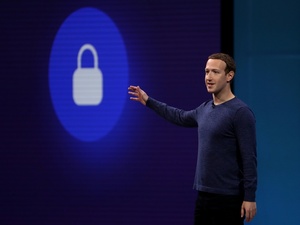 Facebook agreed to pay $550 million over a privacy lawsuit as shares dropped even with the social media giant reporting stronger than forecast earnings.

The leading online social network said net income rose seven percent from a year ago to $7.3 billion, while revenue increased 25 percent to $21 billion in the final three months of last year.

The Illinois settlement -- which still requires a judge's approval -- was based on allegations that users' biometric data was illegally gathered using photo-scanning technology and then stored.

"We decided to pursue a settlement as it was in the best interest of our community and our shareholders to move past this matter," Wehner said during the call.

The number of people using Facebook monthly climbed eight percent to 2.5 billion. For all its apps including Instagram, Messenger and WhatsApp, the figure was 2.89 billion.

"We had a good quarter and a strong end to the year as our community and business continue to grow," said Zuckerberg.

Investors may be concerned about the continuing increases in the amount of money Facebook spends as it pours resources into protecting privacy and preventing the network from being used as a platform for hate speech, abuse, and disinformation.

Costs in the recently ended fourth quarter rose 34 percent to $12.2 billion. Facebook ended the year with its employee ranks up 26 percent to nearly 45,000.

Shares may have also been weighed down by worries about privacy regulations hobbling the company's ability to effectively target its money-making ads.

Wehner also told analysts the company expects revenue growth to slow, in part due to regulations and "other ad-targeting related headwinds."

Recent data privacy regulations in Europe and California as well as enhancements to browser or operating system software from Google and Apple, along with tools added by Facebook itself, are expected to limit the ability of the social network to use "signals" from third-party websites to more finely target ads, Wehner said.

Facebook posted gains in advertising, which represents the vast majority of its revenues, up 25 percent at $20.7 billion in the quarter. It also expanded its user base.

"Despite all of the concerns that have been swirling around the company in the past two years, it beat expectations on revenue, and it demonstrated continued growth in its user base," said eMarketer principal analyst Debra Aho Williamson.

The market tracking firm expects Facebook's momentum to continue, with advertisers increasing spending at the social network and its Instagram service.

Facebook has faced a barrage of criticism recently for the misuse of users' data to influence elections amid increasing calls for the California-based internet titan to be regulated.

This week, it began rolling out a new tool allowing users to view and delete data it collects from third parties.

The feature is part of an effort to shore up Facebook's image in the wake of a series of privacy scandals, including the hijacking of personal data on millions of users by a British consultancy developing voter profiles for Donald Trump's 2016 campaign.

Zuckerberg said the company was "very focused on election integrity," adding he was "proud of the progress that we've made in preventing foreign interference."

"We were behind in 2016, but after working to protect elections and countries across the world for the past few years, we think our systems are now more advanced."