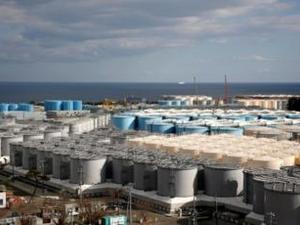 Radioactive water from the stricken nuclear plant in Fukushima should be released into the ocean or vaporized into the air, an expert panel advised the Japanese government on Friday.

The proposal is non-binding and sets no deadline for the government to decide or carry out procedures to deal with the water.

The panel has been weighing the issue for more than three years, but a decision is becoming urgent as space at the site to store the water is running out.

The TEPCO-operated nuclear plant suffered a meltdown in 2011 after it was hit by an earthquake-triggered tsunami.

The radioactive water comes from several different sources -- including water used for cooling at the plant, and groundwater and rain that seeps into the plant daily -- and is put through an extensive filtration process.

The panel convened by the industry ministry said releasing the water into the sea or into the air using vaporization are "realistic options."

Discarding the water into the sea "can be done with certainty," they added, because the method is also used at normal nuclear reactors.

The panel only has an advisory role, and in their proposal said they hope the government "will make a decision with a sense of responsibility and determination".

The government is expected to carry out consultations with local authorities and fishermen, many of whom fiercely oppose putting the water into the sea.

It is unclear when any decision will be made, though no ruling on the sensitive issue is expected before Tokyo hosts the Olympics this summer.

The contaminated water should contain only tritium after being processed by the plant's filtration system. Around 80 percent of it needs to be reprocessed before it could potentially be released.

Experts say tritium is only harmful to humans in very large doses and the International Atomic Energy Agency argues that properly filtered water could be diluted with seawater and then safely released into the ocean without causing environmental problems.

But those arguments have not convinced activists as well as some local residents, including fishermen and farmers who fear the release will imperil their livelihoods.

The treated water is currently kept in a thousand huge tanks at the Fukushima Daiichi site.

Plant operator TEPCO is building more tanks but all will be full by the summer of 2022.