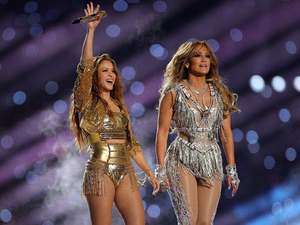 Despite standing only five-seven, Shakira occupied the Hard Rock Stadium like the NFL giants during the half-time spectacle on Sunday. Here are some of the most memorable moments -- with Donald Trump, Kobe Bryant and Jennifier Lopez -- of the 2020 Super Bowl show.

The death of the legendary basketballer transcended the NBA, and a week to the day of the accident, the NFL made a tribute to him. Before the presentation of the teams, the Chiefs and the 49ers positioned themselves on the 24 yard line, a nod to Kobe Bryant's jersey number before the entire stadium observed a minute of silence. Amid the sea of Kansas City and San Francisco jerseys in the stands were some fans in Lakers tunics with the number eight -- the number Bryant debuted with at the start of his career -- or 24. Several Super Bowl players wrote "Black Mamba" -- Bryant's nickname -- on their shoes in memory of the player.

Expected to give a Latino flare to this year's Super Bowl -- held in Miami, the city with the largest Latino population in the U.S. -- Shakira and Jennifer Lopez did not disappoint. The Colombian began with a medley of her notable hits, such as "Whenever, Wherever," and "Hips Don't Lie," before she was joined by the Puerto Rican rapper and singer Bad Bunny. New Yorker Jennifier Lopez took up the baton, keeping the pace fast and fun. J-Lo responded to Shakira's famous dance moves with a spectacular pole-dance sequence, straight out of her recent film "Hustlers". Everything combined to conjure the atmosphere of a Miami club. But judging by the reaction in the stadium and online, Shakira won hands down.

Celebrities, bonkers stunts, and innovations called up by companies to make their mark were eclipsed by Donald Trump and Michael Bloomberg -- the first presidential candidates to offer Americans nationwide Super Bowl ads. They avoided attacking each other and instead addressed black voters. The president claimed he had reformed the country's justice system, embodied by a black woman, who was granted early release. The message was met -- unsurprisingly -- with skepticism on Twitter. Bloomberg's spot, concentrating on gun violence, showed another black woman, the mother of a young man shot dead. The head of National Rifle Association immediately counter-attacked, warning that gun owners would not be deprived of their arms.

A photo of the New England Patriots quarterback, at the entrance to a football stadium, caused a stir with some seeing it as a retirement announcement. "They say all good things come to an end," said Tom Brady at the start of the Super Bowl spot. But it was a hoax and the end in question was that of traditional television, promoted by online service Hulu. The man -- considered by many the best player of all time -- ended the commercial by telling fans: "I'm not going anywhere." Brady is expected to return next year and has not excluded joining a club other than his lifelong team, the Patriots, with whom he has won six Super Bowls.

By coming from behind at the very end of the match to win 31-20, Kansas City made more than one gambler happy, not to mention the bookies, who had made the Chiefs the favorite. According to the American Gaming Association (AGA), some 26 million Americans planned to bet on the Super Bowl -- totaling an estimated $6.8 billion. On the losing side, according to Darren Rovell, of the specialized site Action Network, two people bet, and lost, a million dollars each on the match, opting for the 49ers.