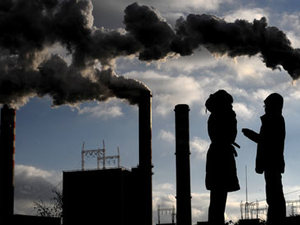 British Prime Minister Boris Johnson on Tuesday called for urgent action to deal with global warming, after his ex-climate envoy warned his own plans for U.N. talks later this year were "miles off track".

In a speech ahead of the COP 26 talks in Glasgow in November, Johnson said the evidence of climate change was "overwhelming".

At an event with naturalist and broadcaster David Attenborough, he called on other nations to match Britain's pledge to reduce carbon emissions to net zero by 2050.

"We've poured so much CO2 into the atmosphere collectively that our entire planet is swaddled in a great tea cosy of the stuff," Johnson said.

He added: "It is now predicted, unless we take urgent action, to get three degrees (Celsius) hotter."

Johnson announced plans to bring forward a British ban on sales of new petrol and diesel vehicles by five years to 2035, and to expand it to hybrid vehicles.

But his speech was overshadowed by a blistering critique of Britain's planning for the Glasgow conference by the woman he appointed to organize the summit.

Claire O'Neill hit out after being sacked as COP 26 president last week. Officials say they want to move the role to a government minister.

In a letter to Johnson leaked to the Financial Times, she warned: "We are miles off track.

"You promised to 'lead from the front' and asked me what was needed 'money, people, just tell us!'. Sadly, these promises and offers are not close to being met."

Johnson said it was right that Britain was the first major economy to commit to net zero emissions by 2050, as it was the first country to industrialize.

"People will say it's impossible and it can't be done. And my message to you all this morning is that they are wrong," he said.

"We must question whether we will have a sufficient supply of a full cross-section of zero emissions vehicles in less than 15 years," he said.

He also urged the government to cut the sales tax on electric vehicles to make them more affordable.

The Society of Motor Manufacturers and Traders (SMMT) also expressed concern, noting that the charging network was "woefully inadequate".

But the move was welcomed by environmental groups.

"Phasing out the internal combustion engine faster is an important piece of the puzzle," said Rebecca Newsom, head of politics at Greenpeace UK.

"However, pushing the date later than 2030 would vastly reduce the chances of meeting our climate targets."

Alison Doig, head of policy at Christian Aid, said the new date was a "positive start" but there must be "concrete action" to reduce emissions in the short-term.

She warned this year's UN talks were hugely important and Britain had a "grave responsibility" to make them a success.

Many campaigners say Glasgow will be the most important summit since the Paris goals for capping global warming were agreed five years ago.

"It's so encouraging the present government have declared this year, the year not of talking about it, not of alarming people, not of warning, but of action," he said.

In her letter, O'Neill had a similar message.

"We are almost out of time to win the battle against climate change and start the process of climate recovery," she wrote.

The format of the U.N. summits needed changing if the world was going to take real action to tackle climate change.

"The annual U.N. talks are dogged by endless rows over agendas, ongoing unresolved splits over who should pay and insufficient attention and funding for adaptation and resilience," she said.