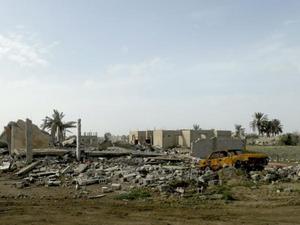 The Islamic State group has maintained its capabilities in Syria despite the death of its chief Abu Bakr al-Baghdadi, an independent US government watchdog said in a report on Tuesday.

An inspector general from the Department of Defense also said that a possible departure of American troops from Iraq would likely lead to a resurgence of the jihadists.

Baghdadi, 48, led IS from 2014 and was the world's most wanted man, heading a self-declared "caliphate" that once spanned parts of Iraq and Syria.

It collapsed last March after years of battle with coalition-backed forces. IS then went underground and reverted to well-honed guerrilla tactics that continued to do damage.

Baghdadi was killed in a US special forces raid in Syria's northwestern province of Idlib in late October, and the group named his replacement as Abu Ibrahim al-Hashimi al-Quraishi, about whom little was known.

In its report, the inspector general said Baghdadi's death did not affect the jihadists.

Citing information from US Central Command (Centcom), which is responsible for US forces in the Middle East, the inspector general said IS "remained cohesive, with an intact command and control structure, urban clandestine networks, and an insurgent presence in much of rural Syria."

Both Centcom and the Defense Intelligence Agency concluded that Baghdadi's death "did not result in any immediate degradation to ISIS's capabilities," the report said, using another acronym for IS.

Tensions between Washington and Tehran boiled over onto Iraqi soil last month, raising fears of war that have since eased. The US killed top Iranian general Qasem Soleimani in Baghdad, and Tehran retaliated against an Iraqi base hosting American soldiers, dozens of whom were hurt.

In Iraq, US forces suspended their operations against IS after the killing of Soleimani in order to focus on protecting the roughly 5,200 American personnel in Iraq.

The US-led coalition has provided training and air support for Iraqi forces since 2014 to help them beat IS, but the pause meant it could not carry out operations or strikes.

Iraq's parliament voted for US troops to leave the country, but Washington refused and Iraqi forces resumed anti-jihadist operations with the US-led coalition at the end of January.

"It is unclear whether US forces will be able to remain in Iraq or the scope of their operations," the inspector general said, adding "without a US troop presence in Iraq, ISIS would likely resurge" in the country.

The IG report rejected rumors that Russian air power and Hezbollah infantry had effectively destroyed takfiri military capability in Syria. The IG quipped to members of Congress, "Hell, I can't even spell 'takfiri'!"