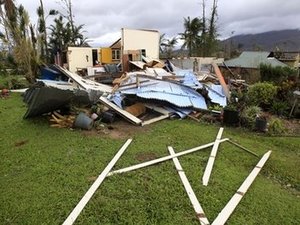 Australia marshaled 4,000 troops and sent a supply ship with tons of food to its cyclone-stricken northeast coast Friday, as awe-struck residents in wrecked towns confronted debris that included boats tossed into neighbors' yards.

Authorities confirmed the first death from the storm that slammed into the coast early Thursday and said a search was under way for two missing people.

Cyclone Yasi destroyed dozens of homes and ripped roofs and walls from dozens more. It cut power supplies in two regional cities and laid waste to hundreds of millions of dollars worth of banana and sugar cane crops.

"I just hope we don't get forgotten," said Lisa Smith, whose house had part of its roof torn off in the hard-hit, seafront town of Cardwell. She complained that state and federal officials had not yet given her remote community any substantial help.

Residents and officials were amazed that the death toll was not higher. The storm whipped the coast with up to 170 mph (280 kph) winds and sent waves crashing ashore two blocks into seaside communities, as tens of thousands of people huddled in evacuation centers.

Power supplies and phone services were gradually being restored Friday, and roads cleared of downed trees and other debris. The efforts were hampered by drenching rain in many parts of the disaster zone, prompting the weather bureau to warn of potentially dangerous flash flooding.

In Cardwell, rain pounded down Friday on already inundated homes through gaping holes in roofs. The waterfront library was in shambles. The roof had collapsed, the books were drenched and the front door lay in the center of the building.

Local police moved through the cluttered streets trying to clear wreckage. Richard Doran, 62, beckoned a backhoe driver over to the front of his shop, where inside, three inches of mud covered the floor. A tidal surge had dumped a tangle of downed trees at his front door.

He still hadn't seen any state emergency service workers and was hoping help would arrive soon.

"The longer it sits like this, the worse it is," he said.

Power and water supplies remained cut and the main road into town was torn into chunks in places and piles of sand washed ashore by tidal surges blocked it elsewhere. Yachts and leisure cruisers were piled atop each other at the marina, and some washed up on the boardwalk.

Prime Minister Julia Gillard said 4,000 troops would help with the cleanup operation, and that more than 600 police and emergency services workers were fanning out with chain saws and heavy machinery.

A ship carrying 3,000 tons (2,750 metric tons) of food and other aid was to arrive Friday in the regional city of Townsville, from where it would be trucked to smaller hard-hit towns.

The cyclone has added misery to a state battered for weeks by the nation's worst flooding in decades, which killed 35 people, swamped dozens of towns and caused an estimated $5.6 billion dollars damage.

Gillard said the cyclone damage would be massive but that it was too early to quantify it.

Treasurer Wayne Swan said the cyclone, which hit a region that produces 90 percent of Australia's banana crop and 30 percent of its sugar cane, would add about a quarter of a percentage point to inflation.

The central bank said in a report issued Friday that the earlier flooding could shave half a percentage point from Australia's gross domestic product growth in the six months to the end of March, but that pre-flood growth levels would return in the June quarter as interrupted coal mining resumes.

After that, huge spending on rebuilding could help add quarter of a percentage point to GDP for two years after that. It said those forecasts did not account for the cyclone.