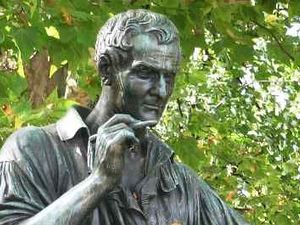 Geneva once condemned Jean-Jacques Rousseau and burned his books, but is now preparing to celebrate his birth 300 years ago with pomp.

The Swiss city has declared him one of its greatest citizens and a key figure of the Enlightenment.

The official launch of the 300th anniversary entitled "2012 Rousseau for All" on January 19 will inaugurate an ambitious year-long program.

It will illustrate the writer's many facets as a philosopher, thinker, teacher, musician and herbalist, who wrote about everything, himself included.

Young film makers are producing works on themes relating to the sage.

Led by director Pierre Maillard, a collection of short films "Blame it on Rousseau" examines his ideas on equality among people, nature, education, in the words of the writer.

"Rousseau is a 'great man' who bridges generations and eras, speaking directly to us, challenging in a contemporary way," says Maillard.

The son and grandson of a watchmaker, motherless and abandoned by his father at the age of eight, Rousseau lived the first 16 years of his life in Geneva before returning at various points.

After the publication of one of his works, Emile, the Geneva authorities fearing his revolutionary spirit, condemned him to exile in 1762. His works were burned in front of City Hall.

The Social Contract was viewed as an inspiration to political reforms or revolutions in Europe, especially in France. In it Rousseau debunked the idea that monarchs had divine powers to legislate.

Rousseau asserts that only the people have that sovereign, all powerful right.

The University of Geneva is also to offer courses enabling the public to discuss Rousseau's thoughts.

Francois Jacob, co-organizer of the celebrations and director of the Rousseau library notes: "He is someone who provided the intellectual framework necessary in a political context for the emergence of the society in which we now live."

As the author of "Reveries of the Solitary Walker" Rousseau thought while walking about 30 kilometers (19 miles) a day. A path called Via Rousseau now criss-crosses the Neuchatel region of Switzerland in the footsteps of the thinker.

Rousseau's works also resonate around the world three centuries after his birth, especially in Brazil and the United States.

Several cities such as Istanbul, Tehran and Tokyo have approached the organisers to join the Geneva events.

Yet says Jacob, "Rousseau has always been unpopular in Switzerland."

In the heart of Geneva, however, Rousseau Island has been revamped for the anniversary.

At its center, a famous statue of Rousseau created by James Pradier in 1835 faces the city that turned its back on him.