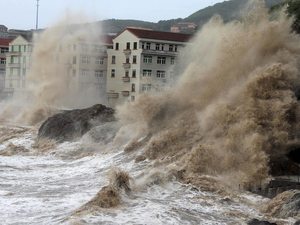 Climate change, extreme weather events from hurricanes to heatwaves, the decline of life-sustaining ecosystems, food security and dwindling stores of fresh water -- each poses a monumental challenge to humanity in the 21st century.

Out of 30 global-scale risks, these five topped the list both in terms of likelihood and impact, according to scientists surveyed by Future Earth, an international research organization.

In combination, they "have the potential to impact and amplify one another in ways that might cascade to create global systemic collapse," a team led by Maria Ivanova, a professor at the Center for Governance and Sustainability at the University of Massachusetts, said in a 50-page report.

Scientists worry especially that rising temperatures could tip the planet's climate system into a self-perpetuating spiral of global warming.

As it is, humanity is struggling -- so far unsuccessfully -- to cap CO2 and methane emissions, mostly from burning fossil fuels.

If at the same time a warming Earth also begins to emit large amounts of these gases from, say, thawing permafrost, such efforts could be overwhelmed.

"Many scientists and policymakers are embedded in institutions that are used to thinking and acting on isolated risks, one at a time," the report said.

"We call on the world's academics, business leaders and policy makers to pay attention to these five global risks and ensure they are treated as interacting systems."

Nearly 1,000 decision makers and top CEOs highlighted the same threats in a similar survey last month ahead of the World Economic Forum meeting in Davos, Switzerland.

"2020 is a critical time to look at these issues," said Amy Luers, Executive Director of Future Earth.

"Our actions in the next decade will determine our collective future."

In October, the world's nations are set to gather for a major United Nations meeting in Kunming, China to try to stanch the destruction of ecosystems and the decline of biodiversity.

Scientists agree that Earth is at the outset of a mass extinction event -- only the 6th in half-a-billion years -- which could drive a million species, or one-in-eight, into oblivion over the coming decades or centuries.

The following month, a critical U.N. climate summit in Glasgow will reveal whether the world's major economies are willing to ramp up carbon cutting pledges that fall far short of what is needed to keep the planet hospitable for our species.

2020 is also a critical year in ongoing negotiations over the high seas, where a Far West free-for-all has led to overfishing and unrestrained resource extraction.

Some scientists have begun to look at the likelihood and impacts of cascading environmental crises.

Recent research has shown, for example, that some parts of the world may soon be coping with up to six extreme weather events at once, ranging from heat waves and wildfires to diluvian rains and deadly storm surges.

"Human society will be faced with the devastating combined impacts of multiple interacting climate hazards," Erik Franklin, a researcher at the University of Hawaii's Institute of Marine Biology and co-author of a key study in late 2018, told AFP.

"They are happening now and will continue to get worse."

That is true even in optimistic emissions reduction scenarios.

The 2015 Paris climate treaty calls for holding the rise in temperature to "well below" 2C.

If, however, carbon pollution continues unabated, the Big Apple could be hit by up to four such calamities at once, including extreme rain, sea level rise and storm surges.

In all such scenarios, tropical coastal areas suffer the most.