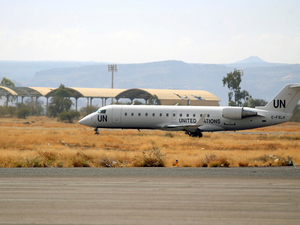 A plane is due to evacuate 24 critically ill Yemenis from the rebel-held capital on Friday, a World Heath Organization source said, as the UN seeks to consolidate a medical air bridge.

A first "mercy flight" evacuated seven children from Sanaa on Monday for medical treatment in the Jordanian capital Amman and the United Nations is eager to build the necessary confidence between the warring parties to enable more.

"A plane carrying 24 patients and their companions is scheduled to leave today from Sanaa to Amman," a World Health Organization source told AFP.

A Saudi-led coalition that has been fighting in support of the beleaguered Yemeni government since 2015, has kept Sanaa airport closed to commercial flights since 2016.

But in November, the coalition announced that it was prepared to allow medical evacuations from the airport as a confidence-building measure to support UN peace efforts.

"This is the first of what we hope will be a number of flights in the medical air bridge," UN Resident Coordinator for Yemen Lise Grande told AFP after Monday's flight.

She said she hoped their would be more evacuations in the coming days, to Egypt as well as Jordan.

The reopening of Sanaa airport is a key demand of the Huthi rebels and one of the issues being pursued by UN mediators as they seek to relaunch peace talks.