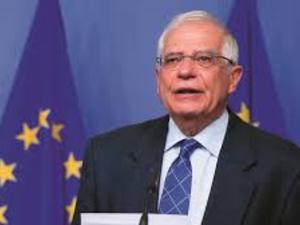 Top EU diplomat Josep Borrell on Friday briefed U.S. leaders on a trip to Iran aimed at easing tensions and discussed a U.S. Middle East plan that he has denounced.

On his first trip to Washington since assuming his position in December, Borrell met Secretary of State Mike Pompeo and said afterward they discussed "many things."

Asked by reporters as he exited if he spoke to Pompeo about Iran and the Middle East, Borrell replied, "Everything."

Borrell earlier in the week visited Tehran where he met President Hassan Rouhani and voiced hope for an easing of tensions and preservation of a 2015 accord that sharply curtailed Iran's nuclear program.

Trump in 2018 walked out of the nuclear deal negotiated under his predecessor Barack Obama and instead imposed sweeping sanctions on Iran, vowing to combat the clerical regime's regional role.

Borrell will also meet in Washington with Trump's son-in-law and adviser Jared Kushner, the architect of a Middle East plan unveiled last week, and House Speaker Nancy Pelosi, the top Democrat in Congress.

Borrell has criticized Trump's long-awaited Middle East initiative, saying the Israelis and Palestinians should directly negotiate a two-state solution based on the lines before the 1967 Six-Day War.

The US plan "departs from these internationally agreed parameters," Borrell said in a statement earlier this week.

Borrell said the European Union was "especially concerned" by Israeli Prime Minister Benjamin Netanyahu's push to annex much of the West Bank and the Jordan Valley.

The Trump plan was widely seen as giving a green light to annexation by saying that areas of Jewish settlements would become part of Israel, while also proposing a demilitarized Palestinian state.

Borrell's criticism came after the European Union was unable to issue a joint statement denouncing the Trump plan due to opposition from a handful of members, most vocally Hungary's right-wing government.

The Palestinian leadership swiftly rejected the plan and has refused to deal with Trump, seeing him as biased after a series of major pro-Israel steps including recognizing contested Jerusalem as the Jewish state's undivided capital.