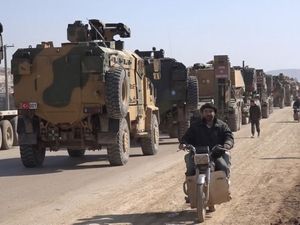 Turkey threatened on Saturday to respond if any of its military outposts in Syria's last opposition bastion of Idlib came under attack, a day after officials said three of them had been encircled by forces loyal to Damascus.

Under an agreement with Russia, key ally of President Bashar al-Assad's regime, Turkey has set up 12 observation posts in Idlib to avert an offensive by Syrian government forces.

Turkey this week sent nearly 150 vehicles with commandos and ammunition to beef up these positions, with officials on Friday reporting that three of them had been surrounded by regime troops.

"Our observation posts in Idlib continue their duties and are capable of protecting themselves with the weapons and equipment they possess," the Turkish defence ministry said on Twitter.

"In the event of a new attack, proper response will be given in the strongest manner, based on the right of self-defence."

President Recep Tayyip Erdogan has given Syria an ultimatum to drive back its troops from its military observation posts by the end of February after eight Turks were killed in regime fire on Monday.

The deadly clashes have angered Turkey, which urged Moscow to press the regime for an end to its offensive.

A Russian delegation was due to hold talks on Saturday with Turkish officials over the situation in Idlib.

Turkey and Russia have worked closely in recent years to resolve the situation in Idlib despite being on opposing sides of the conflict.

Any war that starts between Turkey and Syria will inevitably lead to a proxy war between the NATO and the Russian Federation; and will lead to the collapse of the Russian Empire that president Putin has been building for decades.