Gemayel: We are Still in the Stage of Discussing General Principles 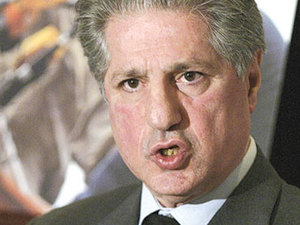 Phalange party leader Amin Gemayel threw the ball of the cabinet formation process in the March 8 court saying the alliance should facilitate the mission of Premier-designate Najib Miqati.

In his turn, Miqati should make proposals that lead to partnership and consensus on how to deal with controversial issues, Gemayel told As Safir daily in remarks published Friday.

He refused to say whether the Phalange would participate in the cabinet even if the rest of the March 14 forces rejected to take part. He only said that consultations among members of March 14 are ongoing.

Gemayel denied that the Phalange had discussed with Miqati on the size of the party’s representation or portfolios. “We are still in (the stage of discussing) general principles.

The Phalange party supports “true partnership,” the former president said but stressed that it was also keen on keeping the international tribunal functioning.

“We have two martyrs -- Pierre Gemayel and Antoine Ghanem – and we are interested in knowing the truth and achieving justice,” Gemayel stressed.