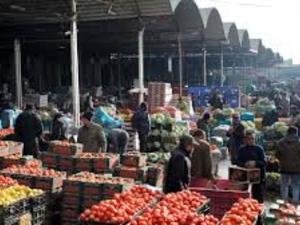 Israel on Sunday imposed a ban on Palestinian agricultural exports, in a move the Palestinians blasted as a "dangerous" escalation in a five-month trade war.

"Starting from today... export abroad of Palestinian agricultural product through the Allenby crossing will not be allowed," COGAT, the Israel defense ministry unit that oversees civilian activities in the Palestinian territories, said in a statement.

The Israeli-controlled Allenby border crossing between Jordan and the occupied West Bank is the only route through which Palestinian goods can reach foreign markets.

COGAT said the measure was in response to a Palestinian decision in October to stop importing calves from Israel.

The Palestinians said at the time that they wanted to decrease their dependence on the Israeli market.

Sunday's export ban came a week after Israel's defense ministry halted all imports of agricultural products from the West Bank to Israel.

The Palestinian Authority responded to that move by banning the import of Israeli produce, soft drinks and mineral water.

"It's a very dangerous action," he said.

COGAT stressed that its action would be reversed "the moment the Palestinian Authority took back its decision to harm cattle trade with Israel and the free market."

So, once again, the Palestinian leadership is going to make their own people suffer because of intrancigence.