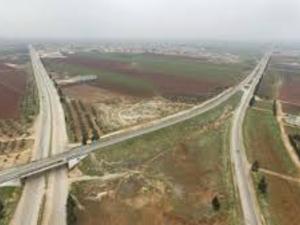 The M5 has been long in the sights of the Syrian government as it seeks to revive a moribund economy after nearly nine years of war.

It connects Aleppo, once Syria's economic hub, to Damascus and continues south to the Jordanian border and recapturing it would allow traffic to resume between economically-vital parts of war-torn Syria.

After weeks of steady regime advances in Syria's northwest, only a two-kilometer section of the M5 remains outside government control, said the Britain-based Syrian Observatory for Human Rights war monitor.

Pro-government forces on Sunday were closing in on the last sliver in the southwest of the Aleppo province neighboring the Idlib region where they have been battling rebels and jihadists, the monitor said.

Since December, Russian-backed government forces have pressed a blistering assault against Idlib, Syria's last major opposition bastion, retaking town after town from their opponents in the region.

The violence has killed more than 300 civilians and sent some 586,000 fleeing towards relative safety nearer the Turkish border.

On Saturday, the Syrian army captured the Idlib town of Saraqeb, located on a junction of the M5 highway, state media said.

Troops then pressed north along the motorway past Idlib's provincial borders and linked up with a unit of Syrian soldiers in Aleppo province, according to the Observatory and state agency SANA.

It was the first time in weeks the two units joined up after waging separate offensives against rebels and jihadists in Idlib and Aleppo.

A little more than half of Idlib province remains in rebel hands, along with slivers of neighboring Aleppo and Latakia provinces.

The region is home to three million civilians, half of whom have already been displaced from other parts of the country.

Some 50,000 fighters are also in the shrinking pocket, many of them jihadists but the majority allied rebels, according to the Observatory.

The United Nations and aid groups have appealed for an end to hostilities in the Idlib region, warning that the exodus risks creating one of the worst humanitarian catastrophes of the nearly nine-year war.