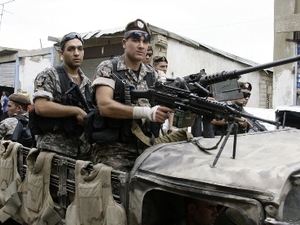 Two army troops were killed and three others wounded in a raid to arrest a fugitive in the Hermel area of Ras al-Assi on Sunday.

The fugitive, identified as Kh.A.D., was also killed in the operation.

TV networks added that there was a chase and that an army force was encircling the region.

An army statement said the troops were pursuing a stolen vehicle when the gunfight erupted.

The army patrol giving chase "was ambushed and came under fire," the statement said.

It said one gunman was killed and the driver of the vehicle was arrested, without providing additional details.

"What is required at this moment is to speed up the arrest of the attackers," he said, without identifying those responsible, in a statement carried by state-run National News Agency.

Ah but that is allowed because after all kizb will liberate Palestine through the deaths of Lebanese soldiers....

ashraf al nass doing what they do best: terrorism!

I read on social media this lowlife is in Switzerland trying to transfer the money he stole to offshore accounts outside Switzerland.

Hence the necessary trip to Davos “at his own expense” yeah right.

where is mystic the shia pos?

Must be the Salafi Jaafars of Hermel backed by the Saudi Wahabi zionists, or not?