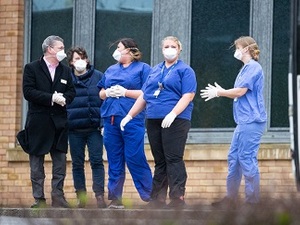 The British government on Monday warned the outbreak of novel coronavirus was a "serious and imminent threat" and announced new measures to protect the public.

Two hospitals have been designated as "isolation" facilities -- both are currently housing Britons who have returned from Wuhan, the Chinese city at the center of the outbreak.

Anyone with the virus can now be forcibly quarantined and sent into isolation if they are deemed to pose a public health threat.

Britain has four confirmed cases of the virus, including one man who fell ill after going to a conference in Singapore. He was being treated as a specialist infectious diseases unit in London.

Two evacuation flights have returned British nationals from Wuhan and returnees have been taken into quarantine for two weeks.

"The incidence or transmission of novel Coronavirus constitutes a serious and imminent threat to public health," the health ministry said in a statement.

Health minister Matt Hancock said the new regulations would "ensure that the public are protected as far as possible from the transmission of the virus."

The SARS-like virus, which first emerged at the end of last year, has killed more than 900 people and spread around the world. Some 40,000 people have been infected in China and 350 elsewhere.