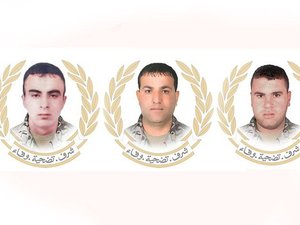 The Army Command on Monday mourned three soldiers killed Sunday in an ambush in the Hermel area of al-Mesherfeh while chasing a stolen car.

Ismail and Ahmed are fathers of two children each while Ezzeddine was unmarried.

Two other soldiers were wounded in the incident, which also resulted in the death of the fugitive Khodor Dandash.

Their blood is on Joseph Aoun’s hands!