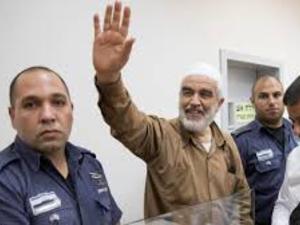 An Israeli court Monday sentenced a firebrand Islamic cleric to 28 months in prison for incitement to "terrorism" in connection with deadly unrest at a Jerusalem holy site in 2017.

Raed Salah had been convicted by Haifa magistrates' court of "incitement to terror" for "praising, sympathizing or encouraging terrorism" in remarks made after attackers killed two policemen on the Haram al-Sharif mosque compound, known to Jews as the Temple Mount.

The deadly July 14, 2017 attack, at the Israeli-annexed east Jerusalem site, was carried out by perpetrators from his hometown of Umm al-Fahm.

His group, the radical northern branch of the Islamic Movement in Israel, was outlawed in 2015 for incitement linked to the Jerusalem holy site.

Salah was also found guilty of "supporting an illegal organisation" in Facebook posts from 2015 and 2016, in which he called his supporters to commit "acts of violence or terrorism" while speaking in favor of his movement.

The Haifa court on Monday also noted that 61-year-old Salah made the criminal remarks on three separate occasions following the Jerusalem shooting.

The prosecution was quoted in the ruling as saying that Salah's deeds "harmed the security of the state and its citizens," and considering the preacher's prominence, "have high potential to cause damage".

Salah, an Arab Israeli, can appeal the sentence within 45 days, the court said.

His arrest in August 2017 followed his release from prison the previous January after serving a nine-month sentence on similar charges.