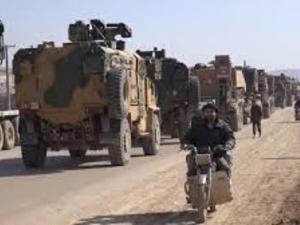 Another five soldiers were wounded in the "intense assault that targeted our elements sent as reinforcement to the region with an aim to prevent clashes in Idlib, ensure our border security and stop migration and human tragedy," the ministry said in a statement.

"The developments are closely watched and the necessary measures are being taken," it added.

But the war monitor did not give a toll.

This is the second such incident in a week after eight Turkish military personnel were killed in regime shelling in Idlib last Monday.

The latest attack is likely to further raise tensions between Ankara and Damascus.

Fahrettin Altun, Erdogan's top press aide, said on Twitter that "Turkey retaliated against the attack to destroy all enemy targets and avenging our fallen troops."

It comes as a Russian delegation is in Ankara since Saturday for talks on Idlib, another round of which was expected Monday.

Turkey and Russia have worked closely despite being on opposing sides of the war, and the two agreed previously on a deal to avert an offensive by Syrian government forces.

Under that deal, Turkey set up 12 observation posts in Idlib.

Turkey has beefed up those positions in recent days by sending at least 350 vehicles with commandos backed by armored vehicles.

But the regime supported by Moscow has intensified an assault against the last major rebel bastion, home to an estimated three million, for more than two months.

The situation in Idlib is particularly worrying for Turkey considering its close proximity to the Turkish border.

The United Nations said Monday close to 700,000 people in northwest Syria have been displaced since December. Many of those have been forced to flee towards Turkey, which is already home to over 3.5 million Syrian refugees.

Ankara fears a renewed surge of violence could cause a new flow to Turkey, which could be politically damaging to Erdogan at a time when Turks are facing economic hardship.