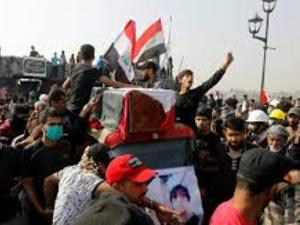 One protester was killed on Monday in Iraq's southern city of Nasiriyah after university security guards opened fire on demonstrators trying to block the campus entrance, medical sources told AFP.

Desperate to keep up their anti-government movement, which appears to be fading after more than four months, a group of protesters had briefly shut down several campuses in the city.

More than 540 Iraqis have been killed in protest-related violence since the rallies erupted, according to a recent toll by the Iraqi Human Rights Commission.

Last week, Iraq's interior minister ordered reinforcements to deploy at schools, universities and public offices to ensure they re-open in full after prolonged sit-ins by protesters.

Their rallies demanding the ouster of the entire governing class broke out in October and have mainly relied on civil disobedience tactics to put pressure on authorities, which have however resisted any profound reforms.

As schools and roads reopen, the numbers in protest squares across the country have dwindled but students have sought to maintain momentum with regular marches.

They have opposed the nomination of Mohammad Allawi as Iraq's new premier, slamming the two-time communications minister as too close to the political elite they have been demonstrating against for months.

Allawi has until March 2 to form a government, which will have to be approved by a parliamentary vote.