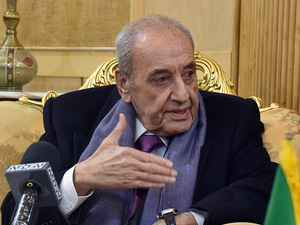 “Lebanon needs technical assistance from the International Monetary Fund to formulate an economic rescue plan,” Berri was quoted as saying.

He was also quoted that the “IMF should advise on Lebanon’s $1.2 billion Eurobonds due to mature in March.”

Berri visitors quoted the Speaker as saying that he also believes that Lebanon can not “surrender” itself to the IMF because “it can not bear its conditions,” An-Nahar daily said.

For the sake of all including me Shia

Who let me open up a good business oh!!! What? I have to pay your son or wife share!!!!
You stole from your own community US!!! and you expect us to still support you!!!! We are waiting for the day we openaly and freely join our LEBANESE brothers and sisters in this struggle against you empire!!!! But not today today i will see you and smile in-front of your face but in my heart i will spit on you.

"he also believes that Lebanon can not “surrender” itself to the IMF because “it can not bear its conditions,"

So in other words, Berri doesn't want any meaningful reforms which takes his ability away to employ his minions in government jobs. He hates oversight apparently and accountability too.

You theif who can trust you anymore ? How much money do you and your wife and your kids in banks. The big question how in the world you got billions of dollars if you are an honest speaker of the house. Government employee making billions? How and explain to the people.

When will our Shia brothers wake up and say enough is enough. Berri is sucking the life out of them and every Lebanese. His daughter was appointed ambassador in the Gulf and I am sure not for her qualifications...

This is the most dangerous economical statement made to date.

IMF will control Lebanon till death tears it apart...

and what do you propose? The IMF will put a plan to rescue the country and the government and its corrupt sponsors have to abide by it. No more theft, no more deals, no more glut in the public sector. What these corrupt politicians stole we will pay for. At least under the IMF we know it will be one time and there will be light at the end of the tunnel.

My dear Masi7i... I think you should remove the resistance Cross from your image..
Frankly, you have hijacked such a sacred symbol, and on behalf all who understand, respect and believe in our Cross, you have zero credibility to show piece this..
Your comments are aggressive and arrogant..
Worse more is how dumb you are!
How ignorant of you to support IMF to hijack our banks, economy, infrastructure... to won us!
Look at Greece, Iraq, Libya.. they own nothing now...

Lebanon (although disgustingly corrupt and hijacked by mafia criminals) still owes itself..
Berri, Mustaqbal and FPM will sadly sell Lebanon to the IMF to save them paying money back or going to jail.

Wake up you dumb ass!

All the above is true.
Our administrations are infested with his minions on payload to do nothing!
I know 2 people to whom he asked commission or share in the business... one of them was sent to "Randa" to finalise a deal (that never happened).
He is a thief, and a smuggler. He smuggles diamonds from Angola!
He is the worst kind, and deserves to end like Kaddafi!

Qaddafi lived in a tent and died a poor man.

Lebanon needs the complete collapse of the current system, some nationalism to overcome the fear that's between the different sects and modern secular laws... Anything else just postpones the inevitable collapse and extends the suffering of 99% of the Lebanese people

Excuse me, but since when is it the job of the Speaker of Parliament to declare on international and financial affairs? What are the Ministers of Finance and Foreign Affairs for?