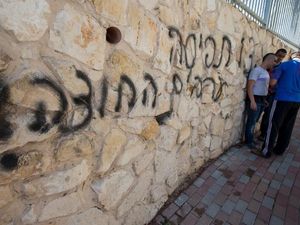 Dozens of cars in an Israeli Arab village were vandalised overnight, police said Tuesday, with slogans sprayed on a mosque indicating the involvement of Jewish extremists.

The slogans "Jews awaken" and "Stop assimilating" were scrawled on a mosque and another building in Jish, a small village in the Galilee just south of Israel's border with Lebanon.

Police said they were investigating the incident, which they condemned along with "all nationalistic hate crimes".

Jish council head Elias Elias told AFP that the tyres of more than 150 cars were punctured.

He said it was not the first time the mixed Muslim and Christian village had been targeted and asked what the reaction would have been if the place of worship defiled had not been a mosque.

"I can only imagine what would happen if things like this would have been sprayed on a synagogue in the US or Europe," he said.

"The whole world would be in an uproar."

The incident bore the hallmark of a "price tag" attack -- a euphemism for Jewish nationalist-motivated hate crimes targeting Palestinians and Arab Israelis and their property, as well as Muslim and Christian holy sites.

Prime Minister Benjamin Netanyahu "firmly condemned" the Jish vandalism and slogans, vowing to "find the outlaws and bring them to justice.

"We won't tolerate any attacks on our citizens," he said in a statement.

The head of the Arab-led Joint List, Ayman Odeh, condemned the attack and blamed the prime minister's rhetoric for stoking such hatred.

"For weeks Netanyahu is sending us one message -- you're not wanted," Odeh said of Israel's Arab minority.

"Today we see the results."

Netanyahu has been accused of using anti-Arab rhetoric ahead of Israel's March 2 election, the country's third vote in a year.

Israel has seen a rise in acts of vandalism against Israeli Arabs in recent months, and in December, the tyres of 160 cars were slashed in annexed east Jerusalem.

Ashkenazis and sephardis go back to europe

Shocking, it’s true that if this happened on a synagogue or Jewish Madrasa in France, the UK or America the president would label this as an infamous act of antisemitism and racism and blabla and they’d speak about it on CNN, Sky News or France 2 for days.

Shame on the double standards. Shame on Israel and its government for not addressing the issue. The very least the should do so offer new pairs of tyres for the 140 damaged cars and clean the graffitis. Not even mentioning the prosecution of the culprits.