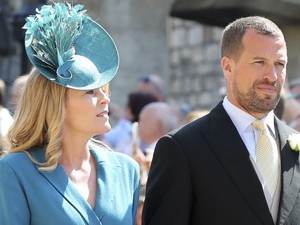 Phillips, 42, and his Canadian wife Autumn will share custody of their two daughters and both remain in Gloucestershire, southwest England.

The split comes after Phillips' cousin Prince Harry and his US wife Meghan quit their royal roles last month in search of financial independence, and moved to Canada.

Queen Elizabeth's second son Prince Andrew stepped back from all royal duties in November following a public outcry over his friendship with US sex offender Jeffrey Epstein.

Phillips is the son of the monarch's daughter Princess Anne and her first husband Mark Phillips. He is the eldest of her eight grandchildren.

He has no royal title and has never carried out duties on behalf of the royal family and so does not receive a public income.

He was born fifth in line to the throne but is now 15th.

The royal spokesman said the couple informed the queen and their families last year.

"They had reached the conclusion that this was the best course of action for their two children and ongoing friendship," he added.

"The decision to divorce and share custody came about after many months of discussions and, although sad, is an amicable one.

"The couple's first priority will remain the continued well-being and upbringing of their wonderful daughters.

"Both families were naturally sad at the announcement but fully supportive of Peter and Autumn in the joint decision to co-parent their children.

"Both Peter and Autumn have remained in Gloucestershire to bring up their two children where they have been settled for a number of years."

The pair met at the 2003 Montreal Grand Prix and married at St George's Chapel in Windsor Castle in 2008. Their daughters are nine-year-old Savannah and seven-year-old Isla.

The couple sold their wedding photos to Hello! magazine for a reported £500,000.

Phillips worked for Formula One teams Williams and Jaguar, and then the Royal Bank of Scotland, living in Hong Kong.

Now he runs a sports and entertainment agency. Last month it emerged he had been promoting milk in a Chinese television advert, holding up a glass in front of a stately home.