MP Saadeh Addresses Parliament after Being Injured in Protesters Attack 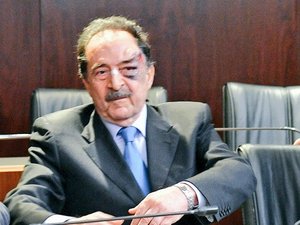 Lawmaker Salim Saadeh was injured and hospitalized on Tuesday when his car came under an attack by protesters in Downtown Beirut.

Saadeh was injured in the head when protesters attacked his vehicle as it was making its way through to the Parliament in Nejmeh Square for the Cabinet confidence vote.

In a video from the hospital that circulated on social media, Saadeh appeared with a bruised eye and stitches on his forehead. He assured that he was in good health.

Protesters in Beirut tried to stop a confidence vote in parliament on a new government.

They mobbed the tinted-glass vehicles of lawmakers and lobbed water bottles at them in a bid to stop them reaching parliament for the vote.

At the beginning of the session, Speaker Nabih Berri denounced the incident and all other attacks at lawmakers, noting that Saadeh was in good health.

Saadeh later arrived in parliament where he delivered a sarcastic speech about the economic crisis.

Lawmakers clapped as the MP entered parliament's hall. They later erupted in laughter as Saadeh began his speech by apologizing for being "late due to health reasons."

The MP blasted the central bank and the economic policies in his trademark humorous fashion as he called for abolishing the ministries of information and the internally displaced.

I'm glad they're all having a laugh. They should let the protesters into parliament, share the good vibes.

ONLY those who collaborate with the Israeli enemy get executed. Haven't you learned your lesson fool after 4 decades.

How would I know BJ, I wasn’t around in 1980 lol.
Remember That 80% of the SLA manpower was Shia and 20% Christian. And where are these people today? They’re employed by Hizbala and FPM like this Amer Fakhouri.

please remove your Cross from your symbol..
This comment sums you up

and what is Syrian Social Nationalist Party MP doing in Lebanon and in the Lebanese Parliament?
Shame he was not killed!