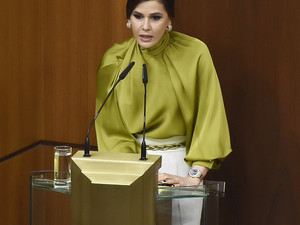 The parliamentary blocs of the Lebanese Forces and the Progressive Socialist Party on Tuesday attended a parliamentary session to debate Cabinet’s policy statement but announced that they will not grant confidence to the new government.

“The economic and social situations were much better during the war and certainly no one wants war’s return, but is it acceptable to face what we’re facing during peacetime?” MP Sethrida Geagea of the LF said in a speech before parliament.

It blamed the dire situation on officials’ “continued deeds and their failure to find solutions.”

“We will not grant confidence to this government, but we will continue to wait for its decisions and steps. We will eventually support it should it launch drastic and quick steps to rescue the country, or else we will be among its fiercest opponents,” Geagea added.

MP Hadi Abu al-Hosn of the PSP meanwhile said the formation of the new government was “disappointing,” noting that “some of its ministers are advisers who are loyal to their parties’ policies.”

“We have major reservations over the poetic policy statement that does not contain any plan, that’s why it is needed to approve the law on the judiciary’s independence before pursuing corrupts,” Abu al-Hosn added, calling for “activating the central inspection authorities.”

Remember Mrs. Geagea: you and your party are the reason Michel Aoun is president today despite your previous knowledge of his history and alliances.

She’s getting old and tends to forget. If you see her tell her to take every day 120mg of ginkgo biloba extract to improve her memory (blood circulation in the brain).

look at the big issue here.. wake up people

Ginkgo Biloba is excellent, I took it once but I don't remember why!

@ Lebanonforever, we are very aware of the shit we are in my friend, we just don't see what we can do more than the protesters are doing now.

If you accuse the party your brother follows, of corruption, you might start a family fight ma ela rabb!

LoL Geralt, you need to take some more to remember!

You could not find anything wrong with what he said so you resort to insults. Your mentality is no different than the shia of hezbollah: if you disagree with them then you become a zionist american. Is the cross a property of yours, your party, or your family? If so, please call the Vatican and complain, idiot.