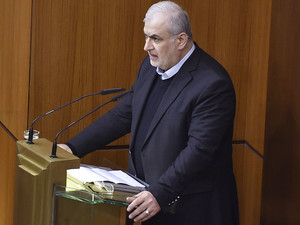 The head of Hizbullah’s parliamentary bloc MP Mohammed Raad on Tuesday announced that his party will grant confidence to Hassan Diab’s government although it “does not resemble” the Hizbullah-led political camp.

“With all due honesty and clarity, this government does not resemble our political camp, but we all accepted it to facilitate the formation mission and we are confident that the visions can be reconciled among its components,” Raad said in a speech before parliament.

Raad also criticized the government’s “lengthy” policy statement, saying “convincing the Lebanese of transparency and integrity cannot be achieved through the policy statement but rather through practice.”

“Winning people’s confidence hinges on the implementation of serious anti-corruption measures,” he said.

Lay down your illegal weapons, stop sponsoring smugglers and thugs, close your 150 illegal border crossings, hands off the airport and port, and then let's talk about anti-corruption measures.

You forgot to mention their worldwide drug network, illegal communication network, illegal arms, and assassins killing Cedar Revolution politicians and writers who believe in independence and sovereignty; from Hariri, to Gebran Tueni, Samir Kassir, Pierre Jemayel, Walid Eido, Francois Hajj, Wissam Eid, Mohamad Chatah, Wissam Al Hassan, and many others. Not to forget failed assassination attempts against Chidiac, Hamadeh, Murr and others. A day will come where Martyr Square will be an open museum for these martyrs of the Cedar Revolution.

When would politicians finally admit that Lebanon is extremely weaker politically, financially and military because of the economic crisis that is 99% caused by Hizbollah's arms and foreign agenda? It is Hizbollah that caused the exodus of all good paying western firms, soured our relation with Gulf nations that employs most expatriate Lebanese, and prevented investments that slowly and gradually shocked our economy instead of being the most vibrant in the region. Economic recovery is impossible without disarming Hizbollah and until the Thuwar acknowledge this reality there is no hope for Lebanon and this Hezbollah’s government of traitors that each sold Lebanon for 30 pieces of silver.

Dudes.. to be fair.. he's not very wrong... The only creature I ever saw.. that comes even close.. to resembling Hajj Mohammad Raad.. is a Sasquatch... Although all the pictures of the Sasquatch were blurry... Umm, Hajj Raad, sir.. answer me this.. have you every been to Montana?!..

My neighbor dropped her car key in the sewage next to her car, the gentleman that I am did a good deed by helping her recover them.... but I was really scared of having my hand bitten off by Nasralrat.
Hizbala delenda est.

But it was only your political camp that formed the government and gave it vote of confidence today;)